The Apprentice Witch is one of the finest fantasies I have read in a long time but the qualities which make the book so unusual are hard to define. There is something in the air of its world that causes a reader to breath deeply and be immersed. Its characters feel known to us, its forests trodden by our feet. To find out more about this story of a young Apprentice Witch, sent to a small country outpost when she inexplicably fails her exam, author James Nicol has kindly agreed to answer a few questions for us.

Kenny: I know you are planning The Apprentice Witch as a multi-book series. How much will Arianwyn age during the course of the story arc?

James: The plan is that by the end of book 3 (current contract in the U.K. is for three books in the series) we will have been with Arianwyn and all her friends (and foes!) for just over one year.

So she will have a birthday at some point! A few people have said it would be nice to see her age over several books, like Harry Potter, but as I’ve been planning the stories in books 2 and 3, time frames are a little more compact than The Apprentice Witch which happens over approximately 8 months, to something more like 3 or 4 months for the sequels.

Kenny: One of the delightful aspects of The Apprentice Witch is the effortless and natural feel to the worldbuilding. Is this a world you have known for some time?

James: Thank you! (I’m now blushing as I type my reply!) It’s always felt very real to me, I see everything very clearly in my mind, which I think helps. Some places in the book have been inspired by places I’ve visited (Lull’s town square was inspired by a trip to Middleham in the Yorkshire Dales) and I’ve stumbled into others after having written them. Conwy in Wales is perfectly Lull as it’s an entirely walled town – but I didn’t visit it until several months after The Apprentice Witch came out here in the U.K.

Kenny: Speaking of time frame, when was the town of Lull founded?

James: Lull is about 300 years old, possibly even older.

Kenny: Hmmn, I was thinking more like 600 so I’ll go with possibly. Also, this world seems to have echoes of WWII England. Is that deliberate or apropos at all? 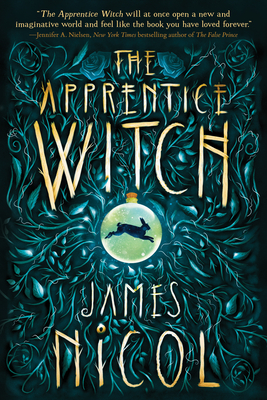 James: Yes it was a deliberate thing – it was partly inspired by my two grandmothers who lived through World War II and used to tell me lots of stories about that time in their lives. Those stories merged with the fairytales and other stories they told me. They were both natural storytellers and I owe a lot of my imagination to them allowing me to make believe and dream as a child and teenager. Also on a practical level I didn’t want my world to be “medieval” or too modern. I thought 1930s / 40s offered the best time period for inspiration and it’s a time period I am drawn too because of the look and feel of the world at that time.

Kenny: One character I’m big on is Arianwyn’s grandmother. She’s seems like a redoubtable, stately figure. Is there any surprising anecdote from her youth which you can share with us?

James: I’m so pleased! Grandma is a real star. I loved writing her. The thing to remember about Grandma is that she’s not a Hylund native, she’s originally from Grunea (one of the other Four Kingdoms in the book) and she has risen to this position of power within the council of elders and then turned her back on them pretty much. Her family bloodline is rich with magic, and she left a large family behind in Grunea including several sisters… perhaps not all as nice as Grandma!

Kenny: If you wanted to give someone a rough sense of what being inside a Spellorium is like, where would you send them in our world?

James: You’d have to go back in time a little bit as well – to an old Pharmacist (or Chemists as we often call them here in the U.K.) Combine that with a bit of a book shop and a curiosity shop and you’re somewhere near how I picture the spellorium. It’s a place of work, but also Arianwyn’s home too – so it’s business like but cosy and safe. :)

James: It was a pleasure.

(The interview portion was published previously in PW Shelftalker)