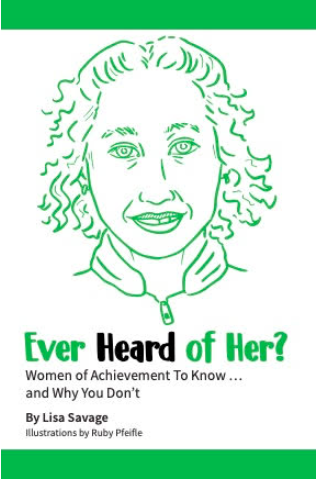 FARMINGTON – On Sept. 15, Independent Green candidate for U.S. Senate Lisa Savage will release “Ever Heard of Her?,” a book highlighting nine women who were standouts in their fields, and yet are largely unknown. As part of telling their stories, Savage also explores how sexism (and in many cases racism and homophobia) diminished their accomplishments and in some cases resigned them to obscurity.

“Just about everyone knows who Jesse Owens is,” Savage said, “but why is it that so few people know who Alice Coachman is? She was the first Black woman to win an Olympic gold medal for the United States, and she won 10 national championships in a row. But you’ve probably never heard of her. Cesar Chavez is a household name, but almost no one today has heard of Emma Tenayuca, a union organizer who founded two chapters of the International Ladies’ Garment Workers Union before the age of 24 and on whose shoulders Chavez acknowledged standing. Why?”

Through research and analysis, Savage has written an accessible, readable, and educational book for all ages that can be used as an educational text or simply an enjoyable deep dive into some of the drivers of American culture who have been left behind by a male-dominated historical record.

“We’re so excited to be bringing a text like this to market,” Industry Books CEO Hannah Harlow said. “As a mother trying to raise two feminist boys, it’s all too obvious how few great histories there are featuring women of accomplishment. Hopefully, this is just the tip of the iceberg, as society comes to grip with the invisible women who have shaped so much of our current way of life.”

“We’re delighted to have a book in hand by Lisa Savage,” DDG Booksellers owner Kenny Brechner said, “whose commitment to justice is infused by her longstanding love of language and literature.”

The book also features illustrations of the nine women by Ruby Pfeifle, an up-and-coming illustrator who is currently a senior at Gray-New Gloucester High School in the school’s International Baccalaureate program.

“One of my favorite things about this project was working with a confident young woman who was inspired to illustrate these portraits. Ruby did such a wonderful job bringing these women to life on the page,” Savage said.

Savage will be supplying signed copies to Devaney, Doak & Garrett Booksellers for the initial release. Pre-orders can be placed right now through the DDG website, by emailing info@ddgbooks.com, or by calling 207-778-3454.

Find information about Lisa Savage, her policy positions, background, and how to support her people-powered campaign at www.LisaforMaine.org.