FARMINGTON – While Mt. Blue Theatre Company has been working steadily throughout the pandemic, it looks as though their next show, The Green Bird by Hillary DePanio, may be opened to a broader audience. The school board will meet soon to determine whether or not the district will lift more covid restrictions so that visitors would be able to attend the show. More information on that will be forthcoming on their website.

The Green Bird is based on the commedia dell’arte play of 1765 by Carlo Gozzi. Commedia dell’arte is an early form of Italian theatre with a lot of improvising and exaggerated comic acting. This play is a pretty obscure fairy tale which director Deborah Muise found after extensive searching and reading. The show is just what we need in our current situation–a slapstick, low comedy that doesn’t require much thought. The story takes place in newly- crowned King Tartaglia’s (Zander Lariveirre) kingdom. After he must leave to fight in a war with its neighbors, it is overtaken by the evil enchantress Smeraldina (Scarlet Tardif) who imprisons his wife (Reese Rackliff) and supposedly kills his children (Lily Hanley, Liam Dorr). The children are saved, however, by Pantalone (Rhett Sexton-Burchfield) and raised by some loving, but foolish peasants (Briar Kerbo, Evan Phillips) only to find out much later their true identities. All the while there is a mysterious Green Bird (Ashe Hartman) who has befriended one of the children and formed a special bond with her and others in the story. The fairy tale is narrated by Calmon, King of Statues (Izzy Webster), and is complete with a happy ending, lessons learned, and warm feelings of family and friendship. The cast is rounded out by various other characters played by Jaden Bradley, Noah Brougham, Kylie Hall, Megan Pinkham, Lily Reed, and Max Wilbur. 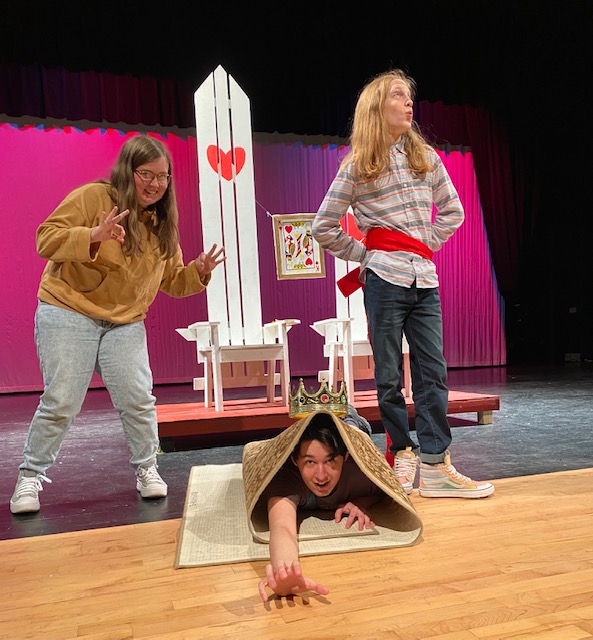 The show will be performed on May 6 and 7 at 7:00 in the Bjorn Auditorium. Please check the website to find out if the show will be open to the public. https://dmuise.wixsite.com/mbtc