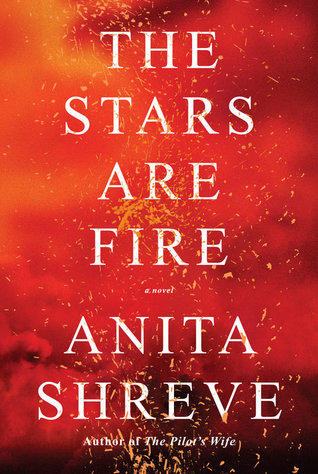 Just 70 years ago this year, Maine, after one of its driest summers, suffered a natural disaster that surpassed any in memory, the fires of 1947. It was a catastrophe that drew worldwide attention.

Among its victims: more than 235 homes and mansions at that haven for multi-millionaires, Bar Harbor and the better part of nine towns in York County. It was there where one eyewitness observed that the “Fire dwarfs the devastation seen at Okinawa.” The fires also wreaked havoc in many other parts of Maine. Fifty buildings including the tabernacle at East Livermore’s Methodist Church Campground, then observing its 100th anniversary, for example, were also destroyed.

One of America’s best selling novelists, the widely acclaimed Anita Shreve – The Pilot’s Wife and The Weight of Water – is now giving us a story inspired by this.

Due to be released in May, The Stars Are Fire tells us the highly personal experience of a young mother and her two children who before the fire lived just outside of Kennebunkport. They, along with an unborn child the mother miscarries during their frantic escape, were among the thousands who were abruptly displaced. Shreve’s interest in writing the story was first occasioned by her learning about women fleeing to the ocean as their only avenue of escape.

“The detail that stuck in my mind that wouldn’t go away was the way the women had to go to the sea to save themselves,” Shreve related in a recent interview with this columnist.

Of course there’s much more to Shreve’s book than the harrowing details of how women and children fled the fire. (Most of the men were left behind trying to fight it.) Stars Are Fire is primarily the portrayal of how the 23-year old Grace Holland, a mother of two infants, not only flees the fire and loses her own home to it but eventually breaks out of a marriage exacerbated by her husband Gene’s behavior. Though there were occasional rough spots in a generally stable marriage before the fire, Gene becomes seriously abusive after he loses an ear, an eye, and an arm trying to fight it. We are thus reminded that one of the more overlooked casualties of such a disaster is the long term impact on personal and family relations.

The story of how a young woman is able to emancipate herself from such domestic entrapment is a familiar theme. It is, however, one that’s well told here.

Shreve artfully takes us through Grace’s many post-fire ordeals and then to her first job outside the home. It’s here where the doctor she admires, a Dr. Lighthart, provides her employment and personal guidance in such skills as learning how to drive a car and knowing how to shrewdly bargain to buy one for the first time. Despite her admiration for the doctor, an urbane and thoughtful Native American, her romantic aspirations are focused elsewhere and are put on hold for much of the book.

As with several of Shreve’s earlier novels it seems likely that this book may well be made into a popular movie. When I asked her a few days ago the actress she would like to see chosen to portray Grace, Shreve told this columnist that she would prefer, “Somebody we don’t know…so that we fully believe in her as Grace.” This, Shreve mentioned, was typical of British casting practices even if it hasn’t been in America.

However cinematic Stars Are Fire might potentially be, however, it relies at times on some unlikely happenstances. Finding a spacious home – much larger than the one she lost – just a few miles away that her husband only a few weeks before the fire had just happened to inherit from his mother is one. The means by which she is able to leave Gene and flee the country with her children is another. This she does by cashing in over $45-thousand of her mother in law’s jewelry – something in today’s dollars worth over half a million. The author in effect has the lead character pulling off an undetected grand larceny in an amount more than ten times the record for a bank robbery in Maine up to that time.

Thus, even though devastation events of the 1947 fires is spectacular and almost unbelievable, such as houses “going up like bombs,” so too are portions of the book.

There are, however, period details that seem authentic. Gene’s job as a surveyor in laying out the course of the new Maine Turnpike – where he declares one will be able to “go a mile a minute” – is one. In an era before obstetric specialists in small towns, the $80 Grace’s family physician quotes for both prenatal and delivery services – about $900 in today’s dollars – is another. So too is Shreve’s depiction of the family doctor as likely the only person with whom women in that era might have a candid discussion about contraceptives and other family planning issues.

Only about a third of women in 1947 were smoking cigarettes, however, though in the book it seems a popular past time for both Grace and her best friend, Rosie.

When I first read its synopsis, describing it as the courageous adventures of a young mother and two small children who both endure as well as escape from this historic tragedy, the image of a tale that might be read as a bedtime story to young children came to mind. Indeed, there are no words taken by themselves to which most Sunday school superintendents would object. However, my image of the book as one that might well be a sort of Walt Disney “G” was dispelled soon enough. The several sketches of Grace’s boudoir life, including one in the third paragraph, would make most parents be sure that it is put on a shelf too high for a 10-year old’s arms to reach.

Erotica is not a preoccupation of the book even though such portrayals have long been typical of this genre of popular fiction. References to sexual behavior are sometimes distracting but do usually furnish a mission in telling Grace’s story.

One still might well do without some of such gratuitous detours this novel takes. On balance, however, this 18th novel by Anita Shreve, will likely be, for some time to come, the primary means by which most people will come to be reminded about this landmark event on its 70th anniversary.

Paul Mills is a Farmington attorney well known for his analyses and historical understanding of public affairs in Maine.   He can be reached by e-mail at pmills@myfairpoint.net