I’ll come straight out and admit it.  I have a goal here. To prove beyond a reasonable doubt that the Common Core has done a wonderful thing for reluctant readers. The adoption of the Common Core has led to widespread grant writing by schools for purchases of non-fiction books from trade publishers.

Publishers have responded to this opportunity by dusting off the non-fiction denizens of their backlists, and acquiring and publishing strong new non-fiction titles. These titles began coming into libraries and classrooms in significant quantities last fall.

Now let us look at some primary material. MSAD 58’s  head librarian, Lori Littlefield, purchased a full set of Penguin’s Who Was/Who Is series. I had shown her the contest Penguin ran for having kids help pick the 100th book in that series. (It turned out to be Steve Irwin.) After stopping by the store and sampling the wares, Lori bought a complete set of the books with the purpose of lending that full set to individual classrooms, at three-week intervals, to the three K-8 schools around the district.

The first classroom they were loaned to was Shelby Newall’s fourth grade class in Strong, Maine. This class, pictured above, was filled with reluctant readers. This class was filled with reluctant readers. When it was time to return the books back to Mrs. Littlefield the entire class wrote her letters pleading for more time with them. If you click here, you can read the rest of the class’ letters. Let’s have a look at them and then draw some conclusions below. 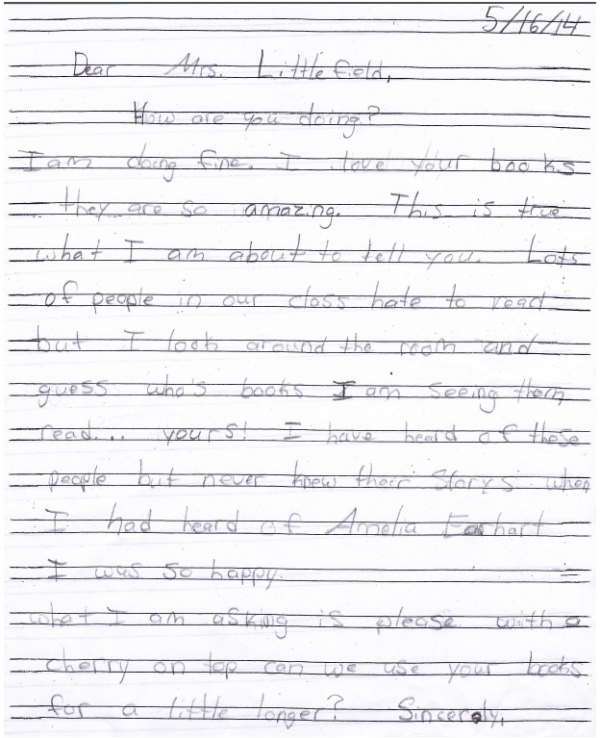 Reluctant readers, particularly in third through fifth grade, love non-fiction because they are hungry to learn more about the big world they are living in. Well written series books, with just the right tone, not too forced and goofy, but still with a bit of humor, and some captivating graphics on every page, are the miracle drug that gets reluctant readers to read. We can all thank the Common Core for making this so obvious. And, whatever happens in the future, let us never forget it.

Kenny Brechner is a reviewer of books who owns and manages Devaney, Doak & Garrett Booksellers on Broadway in Farmington, Maine.