Nationally renowned local children’s book author Betty Culley has followed up her magnificent Young Adult debut novel in verse, “Three Things I Know Are True,” with a traditional prose novel, “Down To Earth.” “Down to Earth” is written for a Middle Grade audience and set in a rural town in Central Maine. It follows a geology loving boy in a family of water dowsers who finds himself enmeshed in controversy when the object of his scientific interest, a large meteorite, lands on his family’s property and odd circumstances begin to arise. To find out more about “Down To Earth,” published by Random House and on sale Tuesday August 24, I caught up with its delightful author.

Kenny: Is there a science to loving science and does it impact character development?

In ten-year-old Henry Bower’s life in Northern Maine, science is finding the right stone to fit in the stone wall he’s building and observing the way the colors of soil and pulverized granite change as his father’s well-drilling rig bores deeper and deeper into the ground. It’s knowing where fiddleheads grow and when snow fleas appear in the spring. For homeschooled Henry, science is everywhere around him on Bower Hill Road.

Kenny: Tell us a bit about your research for this book and your personal connection to meteorites.

I was in grade school when I got to see and touch one of the largest iron meteorites in the world —the Ahnighito meteorite in the American Museum of Natural History (AMNH) in New York City. It was taller than I was and as old as the sun. I couldn’t guess then that I’d grow up to write a book about a meteorite fall. After Down To Earth sold, I travelled to New York City and visited the Ahnighito again. I also met Dr. Denton Ebel, curator of the meteorite exhibit at the AMNH, who I’d corresponded with during the drafting of the novel.

The other research I did was that whenever I saw a well drilling rig in my neighborhood, I pulled my car over and stopped to watch and ask the drillers questions, as fascinated by the process as I was the first time my own family had a well drilled. After fifteen years of pumping water by hand (from a well that went dry every summer) I still appreciate the good deep well water we have. 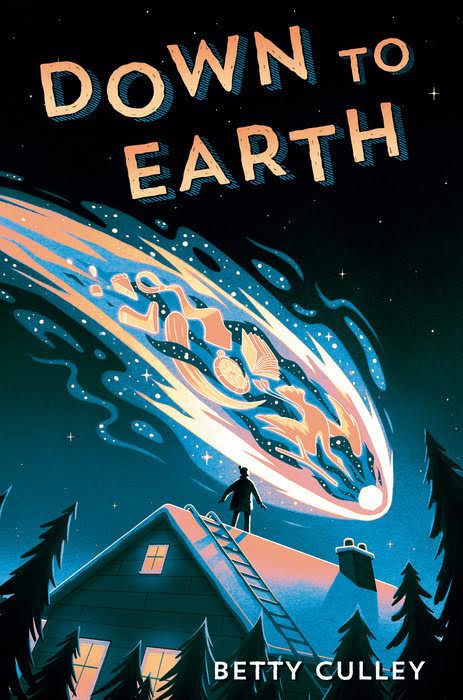 The other research I did was to try dowsing myself! No comment on how that went!!

Kenny: So even meteorites are political?

Sadly, it does not take much to divide people. When the town well goes dry, it’s not long before some folks lay blame on Henry’s family of well-drilling, dowsing Bowers, who still have plenty of water. And that blame also falls on the meteorite that landed in his family’s hay field.

Kenny: What did Henry’s complex connection to dowsing say about the nature of responsibility and community?

Henry comes from a long line of water dowsers, and even though he doesn’t know if he’s a dowser himself, he feels personally responsible for the town’s well going dry. Growing up in a well drilling family, he is aware of the importance of water for drinking, bathing, keeping animals and watering gardens!

Kenny: Did you enjoy writing a prose novel?

I did! Somehow, my middle grade imagination thinks in prose, and my young adult vision expresses itself in verse. I enjoy both of these ways of telling a story. My next middle grade novel with Random House/Crown Books for Young Readers The Natural Genius of Ants, is also in prose, and my second young adult novel with HarperCollins, The Name She Gave Me, is in verse. Both of them come out in 2022.