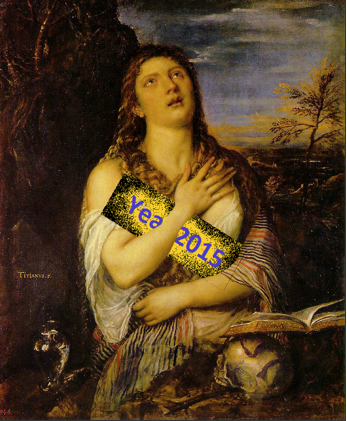 Another Year walks among us now and I am pleased to offer her insights into what lays ahead in this exclusive interview!

Kenny: Thank you so much for taking the time to speak with us.

Kenny: I’m curious about your portrait. You appear to have just received some profoundly good news. Had you just heard about your appointment as the Year 2015 from the Council of Years?

The Year 2015: That was a grand moment too, but the scene captured in my portrait occurred last week, when I received the letter back from the Upper Council concerning the Damocles Edict. I was so pleased!

Kenny: Hold on a moment. I’m a bit out to sea. The Upper Council? The Damocles Edict?

The Year 2015: Well Kenny, the Council of Years is a subcommittee which operates under the aegis of The Upper Council. When a new Year is appointed one of our first tasks pertains to making a submission regarding the Damocles Edict, which is then reviewed by the Upper Council.

Kenny: I see. Can you tell us about this Damocles Edict. I mean I’m familiar with his sword and all.

The Year 2015: Yes it is the same idea but on rather a larger scale. Actually, you may not want to know about this.

Kenny: I think I do. 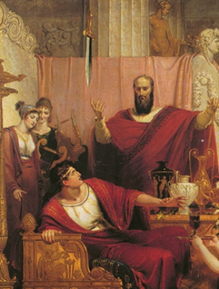 The Year 2015: Hmmn. Well many members of the Upper Council take rather a dim view of humanity. An edict for your destruction was passed in the Year 1520. However the incoming Year 1521 made a case on humanity’s behalf and the edict was revised so that each incoming year must submit one artistic production made during the current year to The Upper Council. The chosen production should be of such a character as to show humanity’s ability to both perceive what is of fundamental importance and to work toward attaining it. Humanity was given an abeyance of 10 years by The Upper Council. And if the annual submission is not deemed worthy the number of years until destruction is then reduced by one. If the submission is particulary strong the Council will sometimes raise the counter back upward!

The Year 2015: Yes, you can see why the edict was renamed The Damocles Edict. In any case my submission was of particular importance as the number was down to one.

Kenny: Gasp. I guess the fact that we are holding this conversation indicates that you chose well. What did you send the council.

The Year 2015: I sent them a copy of Dory Fantasmagory. They absolutely loved it. And raised the number all the way back up to 10! Unprecedented!

Kenny: Phew. Well spotted! It is a sensational and wonderful book, and I can certainly see how it would save humanity from extinction. Can you share with us some of the other books written last year that you considered submitting?

The Year 2015: Sure! First of all bear in mind that to perceive and describe the fallibility and quandaries of humanity is not well suited for submission to the Upper Council. Hence such books as All The Light That We Cannot See, Colorless Tsukuru Tazaki, or Deep Down Dark, regardless of their excellence are not quite the thing here. 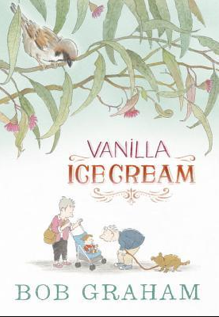 The Year 2015:  Well then. The two books I gave a great deal of consideration to were The Glass Sentence and The Magician’s Land. The ability to grow and be strengthened by gnosis, to achieve responsibility and unfettered atonement seemed fruitful to me. I would have felt confident submitting them to the council. Two others I gave thought to were Vanilla Ice Cream, and Julia’s House For Lost Creatures. Those are both books which I felt would have turned the Council’s thoughts in a constructive direction.

Kenny: Great, thanks! One last question. If your submission had failed and the Damocles Edict had fallen, would you have died or ceased to be along with humanity?

Kenny: Gottcha. Thanks so much, both for taking the time for this interview, and for saving humanity.

The Year 2015: It was my pleasure on both counts Kenny.