Maine is a popular destination, not only for tourists but also for novels. As a book buyer, the news that a book is set on the Maine coast elicits only mild interest these days. Indeed, for all the books set in Maine, very few fictional Maine places are truly iconic. Cathie Pelletier’s Mattagash is unquestionably one of them. The third Mattagash book, The Weight of Winter, which followed Once Upon A Time on the Banks and The Funeral Makers, was published in 1992. Though her many fans will feel that 21 years was a very long wait, they can no longer complain to be waiting, for with The One-Way Bridge Pelletier has returned to Mattagash. In more goods news Cathie will be coming to Farmington to read from her book at DDG on June 28. Since good things do indeed come in threes, Cathie just agreed to step up for a Daily Bulldog interview regarding her new book.

Kenny: So Cathie, what character from someone else’s novel would fit right in in Mattagash?

Cathie: That may be the toughest question I’ve ever been asked. It would be a character from a southern novel, without a doubt. I’d be pleased if any of Lee Smith’s or Michael Malone’s characters might romp through one of my books and not be singled out. Larry Wells, down in Oxford, MS and publisher of Yoknapatawpha Press, seems to think my Giffords are a northern branch of the Snopes clan.

Kenny: Your discussion of war in the author’s afterward is very interesting. Does it extend into your relationship with a novel?

Cathie: Well, it surely did with this novel. But in the end, I suppose it’s my big apology. It’s my way of explaining, of saying, “Look, I hope I got this right. It’s the best I can do as a female writer who’s never been to war.” And maybe because I’ve never been to war, it’s the only way I can honor the men who knew the horrors of Vietnam against their own will, some who are good friends. 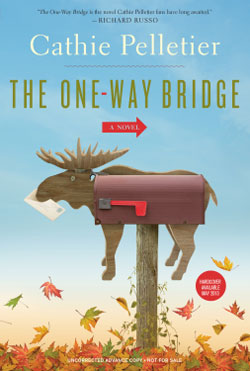 Kenny: Was Harry glad that you finished the book and set it in stone?

Cathie: I will miss Harry all my life. I miss characters sometimes, especially the ones who have died. There’s a young boy in The Weight of Winter that I will mourn for the rest of my life. His name was Conrad Gifford and he died tragically in that book. I sure hope Harry is satisfied. I respect these Mattagash males like Harry very much. I like their quiet intelligence and their wit. One such character in Beaming Sonny Home is Henry Plunkett. With the mill closing down, he tells his mother-in-law he’s thinking of selling life insurance to “the multitude north of Caribou.” She tells him it’s a foolish idea, that there is no multitude. He walks away into the summer twilight, then stops and looks up at the sky. “That there’s Jupiter,” he says. “And right there is Venus.” And then he walks on. Those are the tiny moments in writing that I live for. I know city people who would be hard-pressed to find the moon.

Kenny: I really like the map in the book. Was that your idea?

Cathie: Yes, and quite by accident. With every Mattagash book that I write, I need a map to remind me where everyone lives as I go along. So my maps are always very crude and scribbly. When I suggested to my editor, Stephanie Bowen, that maybe a decent map would make interesting end sheets, she loved the idea and took it to the design department. They also loved it. So I emailed my crude map to my friend Carl Hileman, from Illinois, who created the one you see in the book. (Carl doesn’t know yet that I dedicated the novel to him. He’ll get a copy sometime today and I expect a phone call!) I don’t know why Cell Phone Hill makes me laugh when I look at it, but it does. It reminds me of the Tower of Babel in a book of Bible stories my mother bought when I was a kid.

Cathie: I’m looking forward to my Farmington visit this summer. I haven’t been there since Wesley McNair invited me to teach a summer course at UMF many years ago!