The relevance of first day of school books has never been broader nor more challenging than it is today. Today, the day when the 2021 First Among First Day of School Books champion will be determined. The central themes of these books—anxiety, foundering presentiments, clashes between expectations and experience, making adjustments to adapt to an evolving communal landscape—apply to just about anyone of any age right now. On the other hand, the peculiarities and uncertainties of school in 2021 reflect the broader world more greatly than the more insular and comforting traditional first day of school experience did. 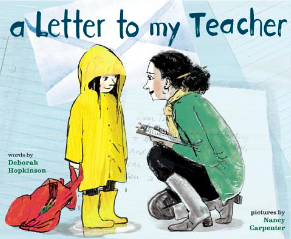 Our winner this year will best address these complexities in a warm, reassuring, and relevant manner. It is true that more is being asked of it than was called for from our prior champions such as “Edda: A Little Valkyrie’s First Day of School;” “Steve, Raised by Wolves;” “A Letter To My Teacher;” “The Pigeon HAS to Go to School!;” and “If I Built a School.” Yet one would expect that this year’s stand out would address transcending the vagaries of fate with aplomb.

Speaking of fate, meeting the specialized needs of this year required sharing the title between two exceptional books: “Beatrice Alemagna’s Never, Not Ever,” and Jef Czekaj’s “Little Ghoul Goes to School.” These two books share not only our championship but also a crucial narrative element: inversion. 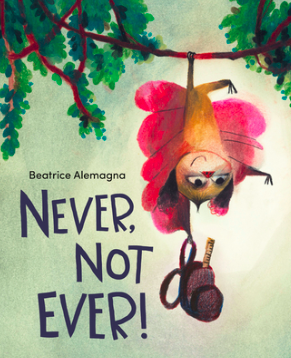 Pandemic-era schooling has, of course, involved parents directly in the primary education process, and “Never, Not Ever!” tackles the divide between parents as support network and parents as active participants in a manner sure to give children a healthy yearning for independence. Pascaline is a bat who will ‘Never, not ever,” go to school. Her parents’ reassurances fall upon ears impervious to plaintive sonar. Everything changes when Pascaline’s protestations inadvertently shrink her parents to tiny size. She decides to tuck them under wing and take them to school with her, able to face her fears now that she won’t have to do it alone. Her parents are totally opposed to this but unable to stop her. This delightful turnabout ends up with our heroine “never, not ever” taking them to school with her again. She would only like to go by herself.

“Never, Not Ever!‘s” deftly subversive treatment of the parent angle is augmented by the clever and charming inversion of first day of school experiences found in Czekaj’s delightful “Little Ghoul Goes to School.” In what turns out to be an extended dream sequence, Little Ghoul’s first day of school appears to be the opposite of what he was hoping for. It is bright and sunny instead of cloudy and rainy. The bus driver is friendly, the principal greets the students with a big smile, the teacher encourages her students to be always caring instead of always scaring. It is a nightmare for Little Ghoul, literally as it turns out. 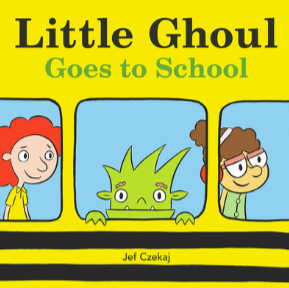 The only bright, or rather dark spot is the goth librarian Ms. Shelley. He wakes up from his nauseatingly good dream to be reassured by his parents that school will really be as horrible as he hopes it is. And so, when the reassuringly bleak day dawns, Little’s Ghoul’s first day of school turns out to be just as wonderfully awful as he was hoping. The only aspect of his dream which ended up being real was Ms. Shelley.

Parent’s and teachers’ tradition of turning to books to help their charges adapt to school called for some untraditional first day of school narratives. Fortunately “Little Ghoul Goes to School” and “Never, Not Ever!” are up to the challenge.