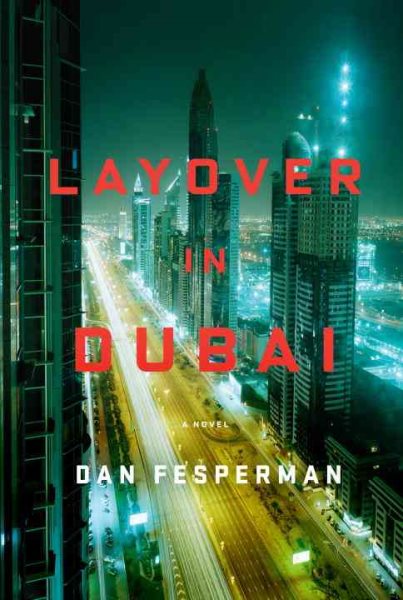 We watch a disaster movie to see disasters of course, cities falling into the ocean, giant asteroids hitting National Landmarks, and so forth, and if a disaster movie delivers enough unthwarted asteroids and untimely seismic shifts, then everything else, credible dialogue, good acting, a plot, is all a plus. Dan Fesperman is a writer who delivers thrillers with a plus. His book are thrilling, so that’s covered, but his careful research,  his eye for historical detail and interesting social and cultural divisions, have always left his readers with a richer understanding of the settings of his books. All of Fesperman’s strengths are on display in his latest novel, Layover in Dubai.

Dubai is a fascinating setting, of course, the incredible pace of development, the stark economic and social contrasts are truly dizzying. The novel has two central protagonists, Sam Keller, a straight laced, talented young auditor for a US based multinational pharmaceutical corporation, and Anwar Sharaf, an aging Dubai detective. Keller and Sharaf are brought together by their shared integrity, and the fact that their respective colleagues have been collaborating with the Russian and Iranian underworld to develop a scheme involving the importation of young Iraqi girls for the Dubai Sex trade. Keller has been set up and Sharaf offers him a way out. The story is enriched by the complexity of Sharaf’s life, his traditional values counter posed by the economic benefits he has received as an Emirati, a native of Dubai, along with his intelligent and independent minded daughter. Fesperman also offers a view into the dichotomies surrounding the life of women in Dubai as seen through the sex trade and through a women’s shelter there, Keller’s time spent hiding out as an itinerant worker in a labor camp, also accentuates the human costs of development in Dubai.

My one quibble with Fesperman’s past works has been that some of his characters have been a bit too stock and wooden in their construction. With Layover in Dubai he has found a more nuanced chord. I have found myself genuinely caring for the characters and pulling for them in the book. Another strength here is the spare plot, almost as though Fesperman were playing a game with limited pieces. The result is very effective. One can feel that the author is getting the most out of every scene, and the reader’s interest never flags. For example, though neither Keller nor Sharaf would be credible as action heroes, and the exciting conclusion of the book manages to be both believable and affecting. Anyone looking for more than just an a la carte thriller which will find Layover in Dubai to be a soup to nuts reading experience indeed.

Layover in Dubai, by Dan Fesperman, is available at your local bookstore. Published by Alfred Knopf.