A fabulous young adult novel, Out of Nowhere, set in Central Maine and written by Brunswick author Maria Padian was recently published by Random House. Out of Nowhere has been getting big national praise, deserved national praise, for its deft handling of immigration issues, personal responsibility, and for its powerful storytelling and compelling character development. The story is narrated by the captain of a high school soccer team whose status quo has been upended by the arrival of some very good high school age Somali soccer players in town.

Not only has Maria stepped up here for a hard hitting Daily Bulldog interview to discuss her book, but she will be coming up in person engage with students at Mt. Blue High School and Mt. Abram High school on May 21st.  We are also trying to get a visit in place at Mt. Blue Middle School. With the schools’ budgets frozen, even with Maria volunteering her time, there is a need for some fund raising to make this dynamic event work. Anyone in the community who is interested in helping to Sponsor these events should contact us at DDG Booksellers for more information.

Kenny: I know that many readers have been impressed that you were able to write such a totally convincing teenage boy narrator. You must be pretty pleased with yourself about that?

Maria: Thank you! Although I’m not sure if “pleased with myself” is the right phrase. More like “Phew! What a relief!” With each of my books I try to do something different, try to challenge myself as a writer, and with OUT OF NOWHERE I decided I wanted to write from a boy’s point of view. Without naming titles, I’ll just say there are a lot of YA books out there, written by women, whose male narrators sound like girls. Sorry; but it’s true. I really didn’t want to fall into that, so I asked my editor and agent to recommend books with outstanding male narrators. One of my favorite authors who I think does boys “right” is Tim Tharp, who wrote KNIGHTS OF THE HILL COUNTRY. Of course, in addition to reading fiction, I had a real live 18-year old boy living in my house while I wrote: my son. Listening to him and his friends, and their banter, which is so, so different from the way my teenage daughter speaks, was invaluable.

Kenny: Tom is a very likable character throughout the book, regardless of the quality of his behavior. Do you think what makes us like a character has anything to do with their actions?

Maria: I think it has to do less with their actions (because we can “like” characters who do some pretty stupid stuff) and more to do with how they feel about their actions. I think we like characters who are self-deprecating, who mess up and need forgiveness, and who are forgiving and loving themselves. Despite his big-man-on-campus-with-a-side-of-rock-star status at his high school, we see that Tom is flawed but well-intentioned. He makes mistakes, but we don’t hold them against him because we see he’s trying to do the right thing. At least most of the time. 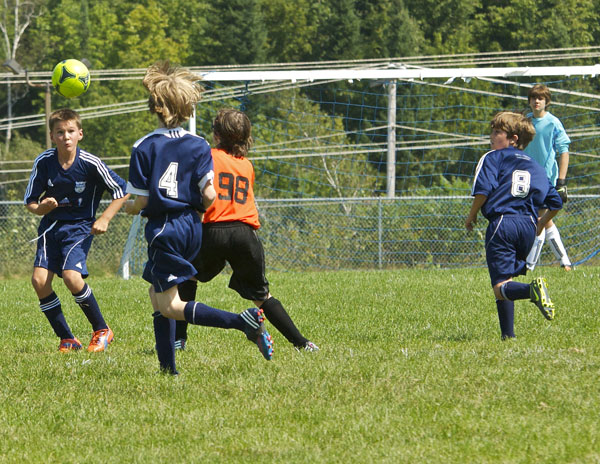 Kenny: Soccer plays a really interesting role in your novel. It’s universality makes the cultural interface of the story work, while expensive United Maine club team references brought class in as well. You obvious know your soccer. What are your thoughts on the sport as it exists in Maine and in your novel.

Maria: Let’s just say that in life I think it’s important to be aware of what you’ve made your “god.” I think there’s a positive, healthy role for athletics, and I personally love sports. Both my kids have played a lot of different sports, including travel, private club soccer in Maine. I think for the Somali kids I met, soccer has been a wonderful bridge into American culture. But I also think parents need to ask themselves, “What’s the goal?” at every level of sports for their children. Because I’ve seen athletic achievement taken as a substitute for character. I’ve seen families devote all their time and resources to attending kids’ games, driving out of state so that LITTLE kids can play soccer against other little kids … it gets crazy. Plus, I think it gives the kids a disproportionate sense of the importance of those games. Sports are great, but we need to keep it all in a healthy balance. Kenny: Many times in YA literature redemption for characters who make mistakes is just one apology away. Out of Nowhere handles the notion of redemption in a more complex manner. Can you tell us a bit about the role of of personal responsibility in Out of Nowhere.

Maria: I think with young people in particular, personal responsibility is developmental. In OUT OF NOWHERE, we see Tom not only grow into a greater sense of making better choices for himself, but also, through his interactions with the Somalis he meets and through his friend, Myla, grow into a better sense of his responsibility in the larger community. His interactions with Saeed give him an increased sense of his own privilege, and as a result, an increased sense of his own obligations. What did Rose Kennedy say to her children? “To whom much is given, much is expected.” Myla puts it less delicately to him, but in the end I think he starts to grow into an admirable young man who makes good choices.

Kenny: The issue of Somali immigrants in Maine is obviously a very complex topic, and one which you handled exceptionally well. How did you balance the many perspectives and points of view involved in a subject which carries with it so much immediate relevance, and so many issues of both cultural differences and shared humanity?

Maria: I was determined to dramatize and not proselytize in this book! I was very, very lucky to meet young people, both Somalis and white Mainers, who shared their stories with me and taught me so much. What I realized was that basically kids all want the same things: to make friends. To make the team. To fit in. To score the goal. As long as I kept my sights focused on the truth of what it means to be a teenager, then the rest of it … religion, culture, history … was just additional texture I could weave into the story.

Kenny: Thank you for taking the time for your upcoming school visits to Mt. Blue High School and Mt. Abram High School. Everyone is very excited!