On Nov. 9 at 7:30 p.m. prominent local author Bill Roorbach will be launching his new novel, Life Among Giants, at the Emery Community Arts Center on the University of Maine at Farmington campus. Launch is the “mot juste” (correct word) as Bill will be heading out afterwards for a wide reaching national book tour.  Life among Giants is a character-driven, genre-bending novel, with mystery and thriller elements woven seamlessly into a coming of age tale. National advance reviews of Bill’s new book have been stellar and thus there is plainly  a burning need to catch up with the author and get a Roorbach’s eye view of the whole situation.

Kenny: Congratulations on seeing this book reach the light of day. I know it’s been a long time coming.

Bill: It doesn’t seem a long time to me, oddly, while at the same time it seems forever. I started writing this some years ago, it’s true. And had a good start when my mother died. This was expected, but it was harder than I thought, harder than we all think, I guess. I stopped writing for over a year–writing just didn’t seem important. And when I tried to write, all I could write about was death. Eventually, though, I returned to this project (along with a lot of others–I’m always into twenty things). Curiously, I found it had changed, remained very much alive. After that, a couple of years flew by, and many long drafts. I was pleased when Algonquin picked it up–They are a terrific, careful, old-school publisher. And they’ve taken all the time they need to get Life among Giants positioned properly, no mean feat. Meanwhile, I keep writing, a couple of books in the pipeline, and the website I host with my friend David Gessner–Bill and Dave’s Cocktail Hour dot Com. Google us! Like us! We like you.

Kenny: Sticking with our theme of time time travel for a moment, if you could send a copy of Life Among The Giants to any author from the past who would you choose?

Bill: I have, in fact, sent a copy of Life among Giants to Scott Fitzgerald, as so much of this novel is in tribute to him. Publisher’s Weekly even called it “Gatsbyesque,” which I found gratifying, of course, and Scott found amusing. (“Let me tell you about the rich,” as Scott Fitzgerald famously wrote. “They are different from you and me. They possess and enjoy early, and it does something to them, makes them soft where we are hard, and cynical where we are trustful, in a way that, unless you were born rich, it is very difficult to understand. They think, deep in their hearts, that they are better than we are because we had to discover the compensations and refuges of life for ourselves.”) Giants is a story of two families, neighbors in Westport, Conn., a well-to-do exurb of New York City. One of the families is very, very rich and getting richer, living outsize lives in a mansion straight out of West Egg. The other family, across the way (I mean acres of well-manicured lawn, and a pond) is of more modest means, and they are sinking fast. Soon, their destinies are intertwined. The main character is David “Lizard” Hochmeyer, an all-American young man, tall and ultra handsome with no idea, a high school football star destined for Fitzgerald’s Princeton, later the NFL, always looking over at the mansion next door, seeing past the American Dream and into the wasteland. He develops a crush (not to say fixation) on the world-famous ballerina who lives there, Sylphide, and we follow the disasters that ensue.

Kenny: When did you create Sylphide? 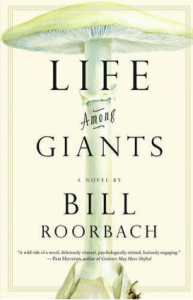 Bill: Saturday, May 5, 2008. No, it’s not like that. She’s been growing in my imagination from college forward, built from dancers I’ve known, but from successful business people, too, and perhaps a lover or two, and lifted to mythic status via David’s adoration. I’m more critical than he. But he’s much taller than I am–nearly seven feet! Plus, he gets to make out with her, the greatest dancer of her generation.

Kenny: In a lot of ways this is a book about trying to wrestle with inherited baggage on behalf of those who deposited it. Do you think David was good at that?

Bill: David is good. That’s the center of things. His weaknesses cause a lot of trouble, but in the midst of real evil, David keeps his compass, redeems the darkness of the past. David is good at most things, but he isn’t impressed with his own powers. He lives life with exuberance, but he has a score to settle, and endless love, endless, obsessive love.

Kenny: Thanks so much Bill we’re so lucking forward to your reading on the 9th!

Bill: Thanks, Kenny–I’m looking forward to it, too. It’s a true book launch, the first event of a tour that will take me all over the country and clear into April. But what a place to start. Our own sweet Farmington. The black box theater at UMF is such a great venue, and we’re going to make it a party to remember! Plus, you’ll be there selling books several days before the official pub date, which is Nov. 13.