If you read primarily for pleasure sooner or later you’ll encounter a book which makes you ask the really tough questions. Are fun and escapism truly more edifying than realistic drama? Am I horizontally enlightened or just shallow? One such prompter of these profound questions is Wereworld, a series of six stupendously entertaining books. So why are these books so much fun? Because they contain the timeless pleasures of great storytelling epics, red blooded villains, heroes and heroines we love and identify with, dark sorcery, heart pounding danger, friendship and romance, multiple storylines racing along, each as happily absorbing as its neighbors. Now, with the sixth and final volume, War of the Werelords, released today, it was our clear duty to interview their august author, Curtis Jobling.

Kenny: Many epic fantasy tales are held together by ancient prophecies unfurling through the narrative. Wereworld, however, seems to be devoid of that sense of Destiny, agreeing more with the Lord Gro that “Fate is but a blind puppy: build not on her next turn.” Is that so?

Curtis: While many characters live and die by their actions, Fate certainly has a hand to play throughout the story, certainly for Drew. As far back as Rise of the Wolf (the first in the series) the Boarlord, Hector, recounts various portentous events that would come to pass. Specifically there’s the mention of Light versus Night and brothers fighting one another: from the beginning I knew that siblings would be important come the finale. Brotherhood can infer many things, both by blood and the bond of friendship. Hopefully the readers are left guessing until the final volume who the real ‘Big Bad’ is for Drew. After all, there are three characters who fit the ‘brother’ description.

Kenny: Are there any Therians so gruesome and abominable that you were unable to depict them in the story so as not to scandalize younger readers?

Curtis: Ha! I have to rein in my gorier excesses at times when I remember my younger readership, but it’s hard for sure. There are some Therians who we haven’t yet encountered that may break the gross-gauge should they ever appear. Their story is yet to be told, but should we revisit Wereworld they’ll be taking centre stage. Some truly horrific, monstrous characters with no connection to humanity. I tell a lie: we’ve briefly encountered one of these creatures in one of the books. Answers on a postcard, please!

Kenny:At first I thought that the Therian gene pool was determined by the father, so that if A male Werefox, for example, were to wed a lady Werestag the child would be a Werefox. At least I understood Duke Bergan to have told Drew that. Later though we find in Casper someone whose Therian nature follows his mother. How do things really work? 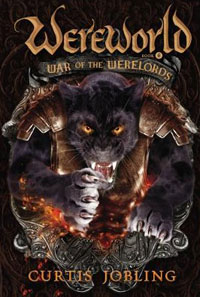 Curtis: Essentially the male bloodline mugs that of the female. Again, I mentioned early in the series that very occasionally there’s an anomaly, a child born that inherits the mother’s bloodline. These are extremely rare breeds, powerful individuals who can shape the world around them. Casper’s one such young man. Fitting into the mythos I’ve created, these beings are born by Brenn’s will (their God), to help bring balance to a chaotic world. Suffice to say Casper’s very much a one-off, a Sea Hawk in every sense of the word. There’s a tale I’d like to tell….

Kenny: Many readers of many ages have been thrilled by the Wereworld series. The sensational conclusion which readers will experience in War of the Werelords, with its stark and unexpected fatalities, relentless pacing, and powerful action scenes, is sure to leave fans in need of reassurance that some new Jobling epic is on the horizon?

Curtis: While I would love to return to Lyssia and write further tales, that’s dependent upon the demand of the audience. If readers want it, I’ll write it. You just need to let Penguin know! ;) As for what’s next? I’m in the process of agreeing on a new series with my publisher. Although it’s set in the contemporary world, there’s a huge fantastical element to it, monsters aplenty and a healthy dash of humor to boot. It should keep the most ardent fan of Wereworld happy!

Kenny: Thank you so much Curtis for your time!

Curtis: No problem chum, it was my pleasure!