One of the most outstanding fantasies to surface this year is Kersten Hamilton’s Tyger Tyger . This dynamic re-imagining of the Irish mythos in modern-day Chicago is loaded with convincing romantic tension, intelligent, three-dimensional characters, and atmospheric dark power. We’re excited that Kersten has stepped up to do a hard hitting interview today.

Kenny: The idea of voice as a conduit of power is a deep current in Tyger Tyger, whether through Aiden, Fear Doirich, or Mr. Wylltson. Are there any passages of the book, which if read aloud with the right cadence, will cause mysterious things to happen?

Kersten: Several. A certain passage, when read aloud, envelops you instantly in the feel of old magic and smell of new books. Another produces an irresistible urge to kiss an Irishman. Awkward if you are reading aloud in a manly Irish pub.

A few darker passages are not so benign. Read them aloud only in daylight, because they will loose the shadows from the walls. If you have been so foolish as to read them aloud at night, and feel a chill hand press through your skin and bone into your mind—sing Padraig’s Shield in Old Irish at once, and cry out to the Creator of creation. It is your only hope.

Oh, and I should mention that one passage, if read with passion, conviction, and pitch-perfect diction, actually opens a door into Mag Mell.

I’m not telling which one. 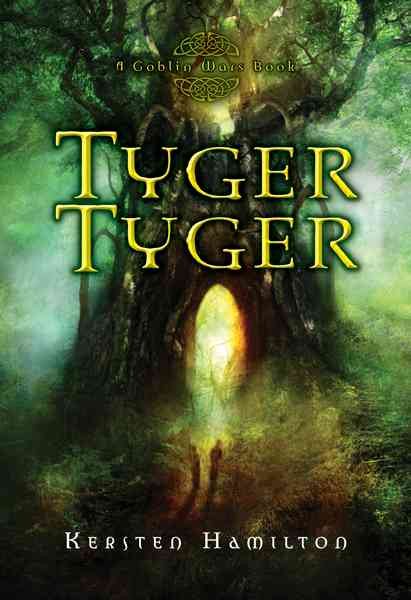 Kenny: Oh so you’re throwing the gauntlet down to our readers! All right then, the first reader to submit the correct passage to us (don’t read it aloud yourself, the Bulldog’s own own Ben Hanstein has gallantly volunteered to test the passages for us!) will win a $15.00 gift certificate. Now then, speaking of the power of voice, will other bards from the western tradition, such as Orpheus or Taliesin, play a role in future books?

Kersten: It’s not possible to spin a Celtic tale without a respectful nod to Taliesin and at least a wink and nudge to Thomas the Rhymer. Orpheus does not figure into the books, but Homer, the blind poet whose name might mean “hostage,” or “he who accompanies” does figure into the story.

Kenny: In book one of The Goblin Wars, Tyger Tyger, there is a pretty interesting truck, Raynor’s Brynhilda. I’m wondering if the hero of your fabulous picture book, Red Truck, will make a cameo in book two of The Goblin Wars?

Kersten: Well…Red Truck’s driver is Italian, as you can tell by the curl of his mustache and the fact that Valeria Petrone, the illustrator, lives in Italy. Abby, Teagan’s best friend in Tyger Tyger, is Italian as well. Abby’s family is connected; you know what I’m saying? I’m sure she has at least one mustachioed, tow truck–driving cousin who could make a vehicle disappear. As a night job, of course. After he’d spent a difficult day rescuing school buses.

Kenny: Tyger Tyger is filled with a wonderfully in depth reworking of the Celtic mythos. Are there any books or versions of the mythos that you would recommend lovers of Tyger Tyger pursue? Did Lady Gregory and Yeats get it right, for example?

Kersten: For people who love wandering through folklore, I would suggest James Macpherson’s The Poems of Ossian and Related Works and Alexander Carmichael’s Carmina Gadelica: Hymns & Incantations.

As for Lady Gregory, she understood the nature of the creatures we are dealing with very well. “The Sidhe,” she wrote, “have been like the Angels, from before the making of the earth.” She knew that they were not one race but a chimera of peoples, cobbled together by the Dark Man’s will. Goblin kind. Lady Gregory saw ample evidence that “those who have received their touch waste away from this world,” but avoided this fate by collecting her information only second-hand, from “many who have seen them and some who have known their power.”

Yeats, however, was not so lucky. His life was sidhe-haunted. He wrote: “Most of the Gaelic poets, down to quite recent times, have had a Leanhaun Shee (Sidhe), for she gives inspiration to her slaves and is indeed the Gaelic muse — this malignant fairy. Her lovers, the Gaelic poets, died young. She grew restless and carried them away to other worlds, for death does not destroy her power.”

Yeats was wrong only in the impression that all Leanhaun Sidhe are female. Some-the most powerful, intriguing, and enchanting — are definitely male.

Kersten: You bet. And let me know if Ben disappears. You’ll probably want to develop a plan of action there.