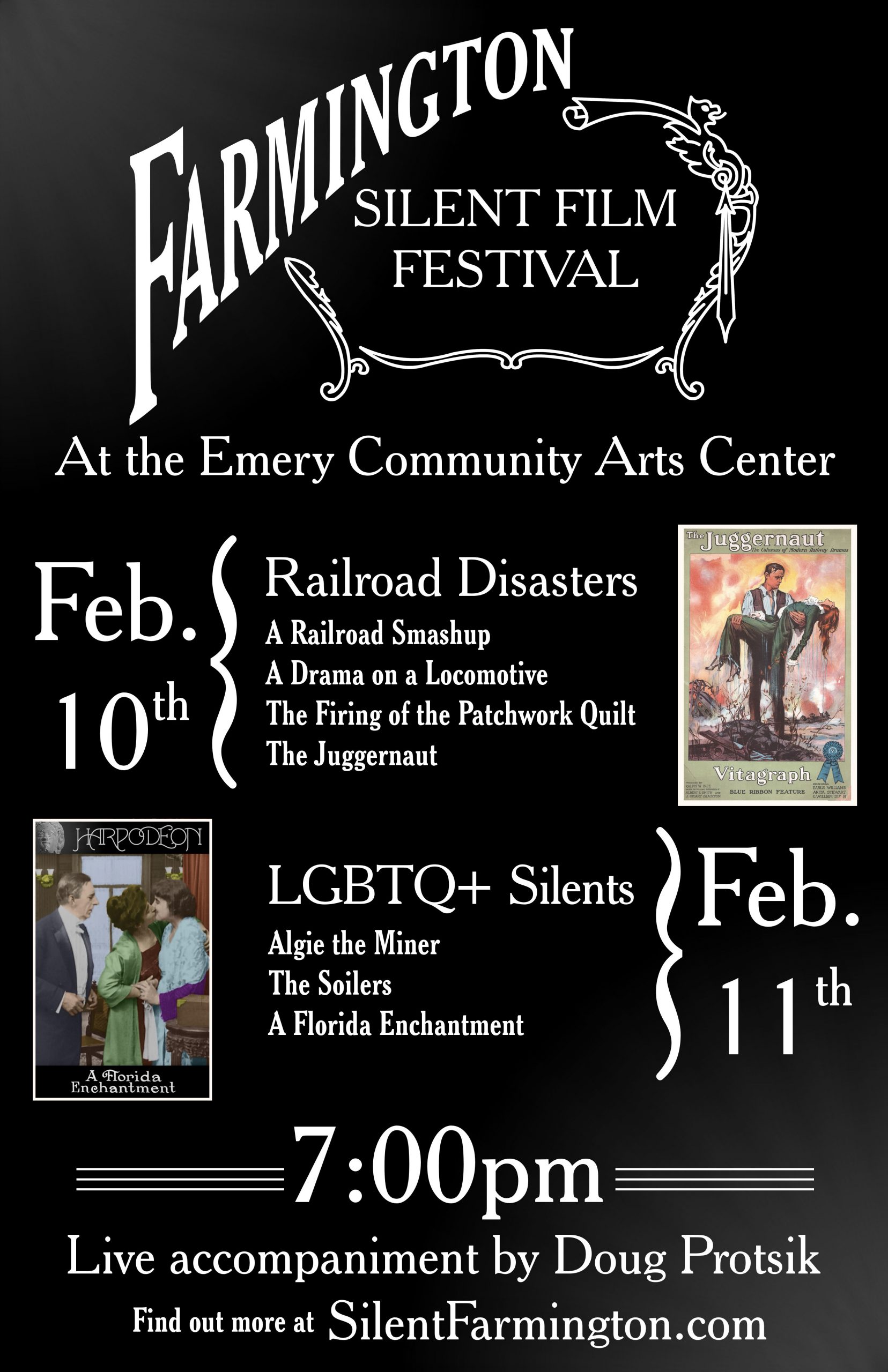 From the Harpodeon film library we are proud to present the first of what will hopefully be an annual silent film festival at the Emery Community Arts Center here in Farmington, Maine. The festival is in two themed programs, both opening on a number of short subjects and closing with a feature film. Railroad disaster films are the focus of the first program and LGBTQ+ silents make up the second program, with live musical accompaniment provided by Doug Prostik.

It is difficult to understand today just what a modern marvel trains were in the early twentieth century. They allowed for speedy travel where once such journeys would have taken many weeks, but trains were also fraught with new and worrying dangers that disaster films were quick to exploit. From short actualities to models and special effects, railroad disasters reached their peak with full-scale train wrecks in the middle 1910s.

A Railroad Smashup (Edison, 1904)
The original railroad disaster, a smashup—a sort of carnival sideshow and precursor to the demolition derby—is caught on film when two decommissioned engines strike each other head-on.

Un drame sur une locomotive (Lux, 1910)
“A Drama on a Locomotive”. Building on the smashup tradition, disaster strikes when two railroad engineers vying for the same woman begin to fight in the train’s cockpit and miss a stop signal, sending them head-long into another train.

The Firing of the Patchwork Quilt (Vitagraph, 1911)
Likely a trial-run for The Juggernaut, in this Hazel Neason short lightning strikes and destroys a trestle over which a train is about to pass and the engineer’s grandmother must find a way to warn him in time.

The Juggernaut (Vitagraph, 1915)
The president of a railroad notorious for cutting maintenance and safety measures to maximize profits fights dirty against a lawsuit brought against him by his erstwhile friend and now district attorney while, aboard one of his trains, his daughter unwittingly speeds toward her doom. This is the first time The Juggernaut has been seen in Maine since 1920.

Modern audience may not realize it, but silent films dealing with LGBT themes not only exist but are not so unusual. American and British films did, however, have to contend with censors that were not at all friendly and had to be got around in one of several ways. Gay characters may be hidden behind coding or excused as a parody or a “what if” situation.

Algie the Miner (Solax, 1912)
From Alice Guy-Blaché, the first female director, Algie is the prototypical example of a coded gay man. Soft and effeminate, he is out west ostensibly to prove himself a man to win the approval of his fiancée’s father, but it takes little to see how important Algie becomes in his mentor Big Jim’s life.

The Soilers (Hal Roach, 1923)
In this burlesque of The Spoilers, the cowboy who falls in love with Stan Laurel is anything but coded. Rare in silent cinema, he is explicitly gay, and almost unique, he gets the last laugh.

A Florida Enchantment (Vitagraph, 1914)
Lillian, with the help of a magic seed, transitions into Lawrence and Bessie accepts his marriage proposal. Of all American silent films, A Florida Enchantment must rate among the most surprisingly frank depictions of a transgender romance.

Tickets are $15 for either show or $25 for a pass to the whole festival. For UMF students, tickets are $10 and passes $15. Included is a program with more information about the films presented and mini-posters for The Juggernaut and A Florida Enchantment.

Emery Community Arts Center at the University of Maine at Farmington