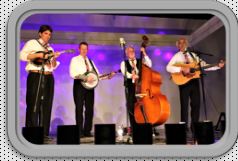 The group plays traditional bluegrass music throughout the State of Maine and New England area. The band consists of four members who all rotate singing lead and provide beautiful, tight, harmonies and smooth solos. The Katahdin Valley Boys were honored as recipients of the “Bluegrass Band of the Year” award for 2012 by The Maine Country Music Association and in 2008, 2009 and 2011 by the Maine Academy of Country Music. Each member brings many years of experience and professional showmanship with hard driving, traditional Bluegrass sound. The boys are unique in that all four band members are featured instrumentally and vocally in each set of every show.