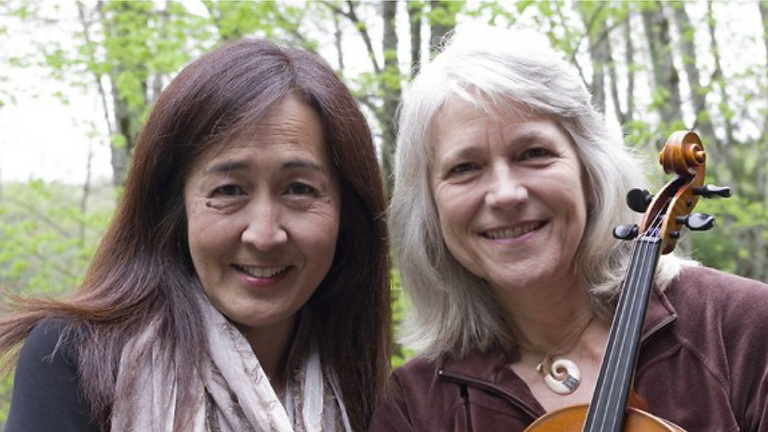 ArtsFarmington is excited to announce the return of Maine Mountain Chamber Music to Nordica Auditorium on Sunday April 24th at 3:00 PM. MMCM founders Yuri Funahashi, piano, and Laurie Kennedy, viola, will be joined by violinist Charles Dimmick and cellist Leo Eguchi. The program consists of Zoltan Kodaly’s Duo for Violin and Cello and Gabriel Fauré’s Piano Quartet in C minor.

Adult tickets are $15, those 18 and under are free as are UMF students with ID.  Nordica Auditorium is in Merrill Hall (224 Main Street) at the University of Maine at Farmington. Visit www.artsfarmington.org for more information and to purchase tickets.

Grammy-Award winning violinist Charles Dimmick enjoys a varied and distinguished career as concertmaster, soloist, and chamber musician. He is co-concertmaster of the Boston Pops Esplanade, and concertmaster of both the Portland Symphony and the Rhode Island Philharmonic. Dimmick has garnered praise and received standing ovations for what the Portland Press Herald has called his “luxurious and stellar performances” and his “technical and artistic virtuosity.”

Leo Eguchi, cello, has been described as “copiously skilled and confident” with performances that were “ravishing” and “played with passion and vitality.” Eguchi has performed extensively across North America, Europe, Australia and Asia. He enjoys an active and multi-faceted performance schedule, including performances with the Portland Symphony, and frequent appearances with the Boston Pops. A strong advocate of new music, Eguchi has premiered works by many notable composers. Eguchi is on the music faculty of Boston College, and is the Assistant Conductor of the MIT Symphony Orchestra.

Laurie Kennedy, principal violist of the Portland Symphony Orchestra, retired in January, 2022, after 40 seasons. She is co-Director and violist with Maine Mountain Chamber Music, founded with Yuri Funahashi in 2002. She was Music Director at Sebago-Long Lake Chamber Music Festival for many years, creating “some of the most evocative programming on the Maine summer music scene”, and presenting “chamber music one would expect to hear at Lincoln Center” .

Pianist Yuri Funahashi has performed extensively in Europe, Japan, Canada and Australia and in many of the major halls in the U.S. As a member of the Festival Chamber Music of New York City, Funahashi performs regularly in Weill Hall at Carnegie Hall and has been a guest artist at many chamber music festivals. She is co-founder and co-director of the Maine Mountain Chamber Music series. Funahashi is on the faculty at Colby College in Waterville, Maine.

Arts Farmington is affiliated with the University of Maine in Farmington