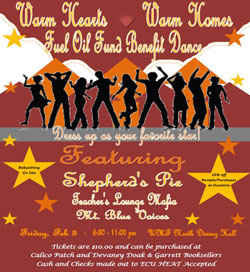 FARMINGTON – In what some are describing as the most successful local benefits in recent memory, area residents turned out in droves to dance and raise funds for the community’s depleted fuel oil assistance fund, garnering in excess of $10,000 in ticket sales and contributions by Friday evening’s end. Organizers tallied the official paid attendance at 281 persons, several of whom were talking at night’s end about next year’s event.

“I can hardly believe we raised $10,000-plus in one evening – one really, really fun evening,” said Rev. Susan Crane, who administers the local Fuel Oil Assistance Fund. “God was certainly orchestrating this party!”

For the Hollywood dress-up theme, the University of Maine at Farmington’s  North Dining Hall was transformed for the evening into a Sunset Boulevard nightclub, complete with balloons, runway lights, cutouts of James Dean and Marilyn Monroe, a red carpet entrance, and the continuous screening of Hollywood classics like Casablanca and It’s A Wonderful Life. Guests had the opportunity to purchase Oscar trophies for attendees, who were then called up on stage to give an “acceptance” speech and sing a song with the band.

Attendees danced until after 11 p.m. to the rhythms of Shepherd’s Pie, which concluded four sets of music with a rousing 90-minute marathon set of classic rock songs. Tom Saviello, disguised as Elmer Fudd,  acted as master of ceremonies throughout the evening. Mount Blue Voices performed a up beat, half-hour a capella performance and Teacher’s Lounge Mafia entertained the crowd with comedy improv on a special “second stage.”

One of the musicians in Shepherd’s Pie, Tim Wallace, noted that “we’ve played in the North Dining Hall several times and I have never seen it nearly as crowded as it was Friday night.”