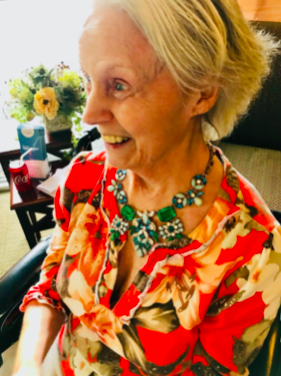 Two weeks ago I was able to make my first trip to Tennessee to visit my Momma in her care facility. It has been over a year since we have been together and that has been the longest I’ve ever gone without seeing her in my life.

Having a parent who has both lost her sight and has dementia, I started to worry that this was going to be THE visit where she didn’t know who I was anymore. I imagine, after the day you acknowledge the eventualities of a dementia diagnosis, the day she stops recognizing us is going to be one of the hardest. I talk to her caregivers weekly, participate in care plan meetings and visit every 6-8 weeks. Because she struggles to focus when talking on the phone, I mostly don’t talk to her when I call. Selfishly, I also don’t want the phone to be the environment where she stops knowing I’m her daughter. A thousand miles away from her is not the place I can manage this eventuality.

Momma’s diagnosis and initial hospitalization was almost 8 years ago, so I have learned so much about dementia. Their progression is unique to them and the change is never gradual, but is more like a highly irregular series of stairs that you never know when a change is coming or how dramatic the step down will be. In Momma’s case, her dementia, as terrible as the diagnosis is, has given us a unique gift. In her world, no loved ones have passed, the timeline has compressed and we are all together. Through these false dementia memories, she has integrated real life stories of her childhood and our family. Her stories are dense with details and when retold the next day, because the dementia causes the record to replay from the beginning, the pacing of the story might vary but the details rarely change. It is the oddest thing to witness. Someone who loses her words, but can retain intricate narratives from one telling to the next and all with so much detail.

We are so fortunate because at 87, she is physically in great shape and amazingly, her dementia has plateaued for some time. Because conversations with Momma go where her mind takes us, on this last visit, we were at a family gathering at a lake house on Fort Patrick Henry Lake in Sullivan County, TN. There were family members (living and long since passed) in attendance from both sides of the family. There were three boats for fishing and they went out daily to catch largemouth and smallmouth bass, trout, and striped bass. Note: I don’t think this house ever existed and I don’t remember ever being on this lake, but I checked and these are common fish species for this lake. Evenings were spent frying fish for supper and when not fishing or swimming, folks dipped their feet in the water, laughed, talked and tried to stay cool.

In my cooking world and in Momma’s, avoiding food waste and eating in season is a theme. This means that the food elements to her stories center around what is available both by season and on hand. Because beans (ex. pinto or butter beans) or field peas (ex. black eyed) were served at least once a week as the staple of the dinner table, there were always leftover beans or peas in the refrigerator. I think of black-eyed peas as the Red Delicious of the field pea world: the most well-known and widespread but a bit generic and not necessarily the tastiest or most interesting.Technically, field peas are beans and have little in common with green peas. Field peas are cowpeas, so named because they were grown as a rotational crop in the fields instead of in gardens and the varieties I’ve eaten since childhood include purple hull, crowder, zipper, red peas and lady peas. Their flavor and texture range from delicate and mild to earthy and meaty.

Because Momma doesn’t eat fish, when she talked about lake house meals in any detail, they focused on the foods SHE enjoys. She is what I would describe as a “Southern Vegetarian”. She prefers mostly vegetables, but most of these are cooked and seasoned using pork in some form. As with many families, vegetable based meals were common both b/c of the cost of meat and the abundance of vegetables from the garden. The meal she described in the most detail in this lake house story included pea cakes, fried cabbage, Miss Nervy’s potato casserole (also known as funeral potatoes), fried corn and cracklin’ cornbread. With these recipe names, don’t assume that fried means deep fried. It often means something closer to sauteed over medium heat and often in a cast iron skillet.

Wash and shred cabbage. Heat bacon grease in an iron skillet over medium high, add cabbage and stir until cabbage is shiny. Reduce heat to medium, add red pepper, vinegar and salt. Continue cooking until the cabbage is tender. 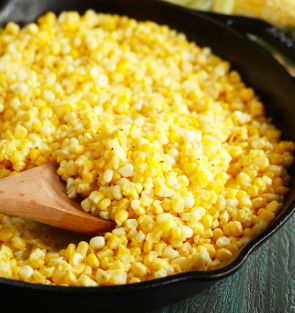 With your corn shucked and cleaned, place it standing up in a large bowl or pan in your sink. (Cutting corn off the cob is quite a task and a messy one at that. I think it’s best to do it in the sink. You’ll thank me later when it’s time to clean up.) Run a sharp knife down the cob cutting the kernels off.

Next, we are going to “milk the cob”. To do this, scrape all the starch and remaining corn out of the remaining kernels. This is what gives fried corn it’s unique texture and flavor. Simply turn the back of your knife nearly perpendicular to the cob and scrape down the sides.

Reduce the heat to medium low and stir frequently, cooking for 20 to 30 minutes – or until it’s cooked to your liking. Immediately before removing from heat, add remaining butter and stir until melted.

NOTE: If you make your own vegetable stock, save the corn cobs in the freezer and add to the pot. They impart a wonderful sweetness.

In a large skillet, fry the bacon over medium-high heat until it begins to brown. If oil or bacon grease, simply heat until a drop of water sizzles in the pan. Add the onion and cook, stirring often, for about 5 minutes, until soft. Add the broth, stir, and remove from the heat.

Pick through peas, rinse, and add everything to a stock pot, bring to a simmer over medium heat, and cook for 30 minutes or until the peas are tender. Season with salt and pepper.

NOTE: Don’t forget to drink the pot liquor, or bean broth, which contains essential vitamins and minerals to boost your immunity! 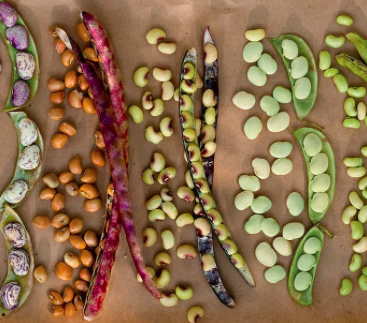 Form into patties and heat a thin layer of oil in a skillet over medium-high heat. Fry the fritters in batches cooking 3-4 minutes per side, flipping once, until golden brown.

In a small bowl, combine remaining ¼ cup melted butter with crushed corn flakes. Sprinkle over the top of the casserole. Cover the dish with foil and bake for about 60 minutes. Remove foil and bake an additional 5-10 minutes to add some crunch to the topping. Serve and enjoy!

2 c cornmeal
2 tsp baking powder
1 tsp baking soda
1 tsp salt
1 egg, beaten
2 c buttermilk
1 c cracklins (Cracklins are the crispy bits left in the bottom of the pot when lard is made. If you don’t have cracklins, crumbled cooked bacon can substitute, but reduce amount to ½ c)

Preheat the oven to 400F and let a greased iron skillet warm in the oven as it preheats. Sift together the cornmeal, salt, baking powder and baking soda. Mix in cracklins. Combine buttermilk and egg. Combine liquid and dry ingredients and pour into the preheated skillet. Bake until the top is a deep golden brown.