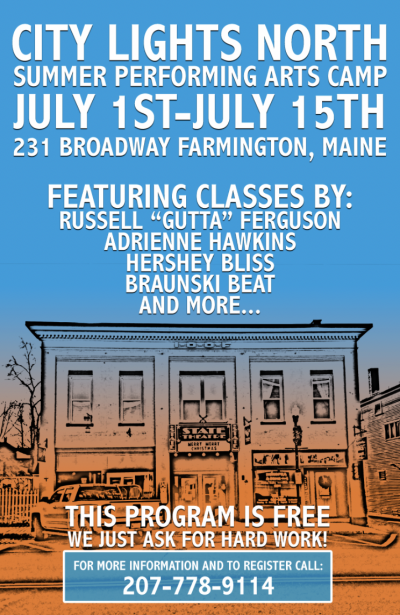 FARMINGTON – City Lights North is a free performing arts camp for children, and it is returning to Farmington for its 19th summer.

The camp’s arts studio is located at the State Theatre on 231 Broadway, and registration begins on Friday, July 1 from 8 a.m. to noon. The two-week program begins on July 1 with classes running from 8 a.m.-3 p.m. daily through July 15. There will be a final production at the Emery Arts Center that will be open for the public to attend on Saturday, July 16.

City Lights is a performing arts program based in Boston that has been free for 40 years, with the mission to prepare students for a professional career in the arts by providing them with a free learning opportunity. Because the program is free, the only requirement of the students enrolled is to be willing to put in lots of hard work.

There will be five teachers coming up to Farmington, along with eight students who are taking classes at the City Lights location in Boston. Classes will be taught by Russell Ferguson, Adrienne Hawkins, Braun Dapper, Hershey Bliss, Zakyia Watkins, and Duggan Hill, the founder of the program.

There are a wide variety of classes available for students to take, including singing and acting classes, and they teach many styles of dancing including modern, classical, breakdance, and hip-hop.

“We teach singing, dancing, and acting, because when you go to audition for a film you have to be able to do all three,” Hill said. “We have had children in films from The Best of Families, The Last of the Mohicans, School Ties and many others.”

Students from Boston City Lights have performed as openers for many well known theaters and performers such as Gladys Knight, Ray Charles, the new Boston Garden, Symphony Hall, and almost every major theater in Boston.

“They even did the very first dance during the halftime show for the Celtics, and something kids will never forget is seeing a house standing up to applaud,” Hill said. “I get to show them that this is what happens with hard work, it pays off.”

Children walk away from the program learning many new skills that can help prepare them for a professional career in the arts.

“Anybody is welcome and it doesn’t matter what your ability is as long as you’re working hard and trying your best,” Hill said. “It doesn’t matter if you can’t put two feet together, you just need to be dedicated.”