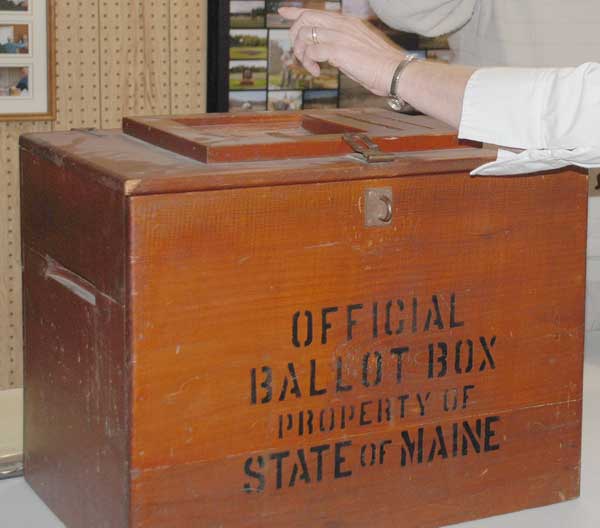 One of his last addresses was among the more foretelling. It was on a bill to expand absentee voting. Speaking in 1959 during the waning days of his last regular legislative session, Boucher successfully won the defeat of a bill that proposed abolishing the requirement of a doctor’s certificate before a voter could use physical disability as a grounds for absentee voting.

“I prophesy that if this bill becomes law you will have more absentee ballots than you have voters at the polls on election day,” Boucher predicted.

Despite Boucher’s protests, future Maine legislatures did eventually expand the basis for absentee voting. If recent trends continue we may soon see a time when, as Boucher predicted, over half of all ballots will be by absentee. As we embark on the final weeks of Maine’s biennial election odyssey it’s worth taking a look at how we arrived at this point in the journey.

The concept of any kind of pre-printed ballot, let alone an absentee one, is a novel idea to modern democracy. Voting in Maine when we first became a state was done on sheets of papers on which citizens would handwrite a chosen candidate’s name. (This is still done today in some of Maine’s smaller towns as they choose local officials at spring town meeting time.)

Private groups such as political parties, however, had the prerogative of supplying competing ballots. Voters could thus make a choice not simply by selecting names on a standardized form but by choosing from an array of party sponsored “tickets,” sometimes flamboyantly decorated and often distinguishable by the color of their paper. Such a system allowed others observing the process including, for example, the voter’s employer and even those blatantly offering financial inducements, to clearly see who a voter was choosing by noting what color ballot was deposited in the ballot box.

However, by 1831 Maine became the first state to require that voting for major office be done on a white printed ballot. Voters depositing a ballot on colored paper were subject to a 50-dollar fine. Despite this safeguard, the system still risked abuses of the earlier regime because ballots still could be privately printed and then marked outside the polling stations.

This changed in 1891, when Maine adopted the secret ballot. First used in Australia in 1858, it allowed only government printed ballots that originated from within the polling place. The system was also noted for its use of private voting compartments or booths. Gone was the time when pre-printed tickets issued by political parties could be brought in from outside. Gone too was the scandal of arm twisting and intimidation typifying the earlier system of conspicuous balloting.

All except those away on active military duty were still required to show up at the polls in person on election day until 1921. This was when those who certified they were unable to vote because they were out of town during voting time were permitted to vote absentee. A move by Representative Maher in the 1921 session adopting this law, the first after the advent of female suffrage, to further expand eligibility to physical incapacity was defeated. This was despite his plea on behalf of “women who will not wish at certain times to go through the stress, inconvenience and publicity of the polling place” while pregnant.

By 1937, the physical disabilities basis for absentee voting was enacted, however, but only those obtaining a doctor’s certificate of incapacity were eligible until a 1961 amendment that took away the doctor’s certification requirement.

The next major expansion of absentee ballot eligibility was enacted in 1999 and does away with any criteria for a voter requesting an absentee ballot. This change has resulted in a rapid upsurge in outside the polling place voting in Maine. In this year’s election over 25 percent of voters are expected to vote absentee. (The change has not seemed to have resulted in a significant increase in overall voter turnout, however.)

The 1999 reform was rolled back a bit, however, in the aftermath of the Tea Party Revolution. That was the 2011 GOP sponsored change that reinstated the need for a reason, such as medical or travel commitments, if the request for an absentee ballot came in the three business days before the election itself.

This year that means beginning Thursday, Nov. 1 the rules in this respect revert to those that applied under the old system. Though it is a move that would have won applause from Senator Boucher, it is a possible trap for the unwary. It is also a reminder that the same issues which so troubled Senator Boucher have still nearly 60 years later been ones with which we have still not fully come to grips.

Paul H. Mills is a Farmington attorney well known for his analyses and historical understanding of public affairs in Maine. He can be reached by e-mail: pmills@myfairpoint.net