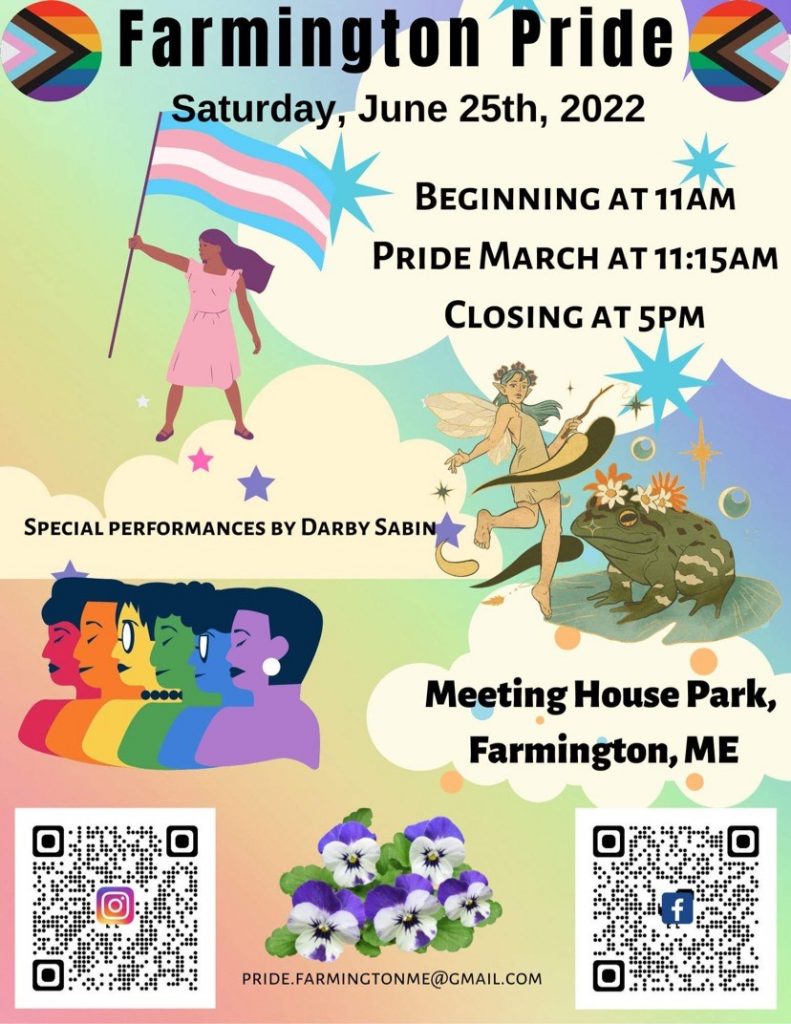 FARMINGTON – On June 25, Farmington will have its first organized Pride Month event at Meetinghouse Park. The event will include performances, vendors, food, a bar crawl and most importantly organizers said, a safe space for members of Farmington’s LGBTQIA+ community members and their allies to gather.

“I live and breathe queerness, it’s my existence. I’m not straight, and I’m not cisgender, and I like people,” Saulnier said. “I know labels are helpful for a lot of people, and that queerness is still identifying as something, but I find more joy slapping that label on my identity, rather than trying to find other, smaller labels that fit my identity. Because I’m just queer, man.”

Saulnier moved to Farmington from Willimantic, Conn. in 2017 to attend classes at the University of Maine at Farmington. He said that he has had an overwhelmingly positive experience in Farmington as a trans man and believes that he has found his community here. He believes that without people he trusts and who love him, the infrequent experiences he does happen to have with transphobia in Farmington would be much more difficult. This notion, he says, really conveys just why a Pride event, and a more connected LGBTQIA+ community is very necessary in Farmington.

“The queer experience can be really painful, and we deserve a chance to celebrate the fact that despite being persecuted by our peers and people in the community who don’t want to learn, there’s so much joy in being able to love who you love and love yourself. It’s important for queer people of any age, and also our allies to have a place to gather and support each other.”

When he moved here, he knew that there were a lot of people here that belonged to this marginalized community, yet small towns have a tendency to isolate people who are part of more counter-normative communities into the margins, individualizing and silencing them. Saulnier finds that taking part in this strengthening and realization of the LGBTQIA+ community through organizing this event has “opened his eyes” to just how many members of that community really are here.

“My favorite part about helping build the pride community in Farmington has been the outpouring of support from elder queers because they’ve waited longer than any of us to see something like this in this area. For them I imagine it feels like coming home.”

Despite the rise of anti-LGBTQIA+ legislation, school curriculum, and hate crimes across the country, Saulnier isn’t worried about there being any conflict at Farmington’s first Pride.

“I think when we get to the day of the event; it’s going to be so validating to see all of the work that we have put into it culminating in one experience for the whole Farmington community. There’s a possibility that we could have people come to protest our event, but I think that there will be more people there that want to learn or want to come to celebrate themselves and each other,” he said.

Farmington Pride will begin 11 a.m. on Saturday, June 25 at Meetinghouse Park, and will feature a special performance by Darby Sabin among others, a Pride March at 11:15 a.m., and will be ending at 5 p.m. For more information, find them on Facebook and Instagram.