RANGELEY – Patrick McGowan weaves the spirit of adventure and social justice into his first novel in a twenty-first century Robin Hood story – with a twist.

His novel, One Good Thing, is a “Maine adventure story with purpose,” according to McGowan.

The avengers in the story take to the skies over the wilds of northern Maine and remote Canada risking everything in a mad-caped scheme to kidnap a couple of crooked, greedy billionaires.

McGowan will be on Bill Green’s Maine on June 23 at 7 p.m. and June 24 in the morning, talking about why he wrote the book and what he hopes the novel will accomplish. Green traveled to Rangeley to interview the author.

“During the winter of 2014-15 we lost power over the entire Christmas holiday. Luckily I had this story in my head for a book. I started writing,” said McGowan. 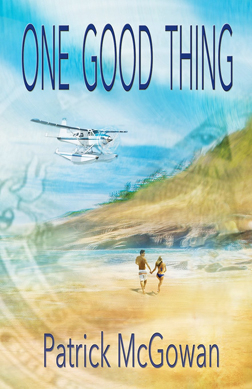 McGowan was born in Bangor and raised in Somerset County. He learned to fly at the age of 16 and began a lifetime of adventure and backcountry bush flying. Inspired by his home state, a place of magnificent beauty, he began a public service career, which included being a legislator, presidential appointee, and member of a governor’s cabinet.

During the Baldacci Administration, McGowan was the Commissioner of the Department of Conservation.

The book features Mac McCabe, the owner of Allagash Air, who flies wealthy customers into the wilderness to unforgettable and often life-changing experiences: camping, fishing, and hunting. When the man behind the deal to close the local paper mill forces Mac’s airplane into a deadly spin with his jet, Mac dreams up a plan to get even. He recruits the military discipline of his brother-in-law, the skills of a journalist and a beautiful computer expert to form his band of thieves.

McGowan’s descriptions of flying over the northern woods and fishing are awe-inspiring. One gets the sense of actually being in the plane sweeping 0ver the water in-between the riverbanks, below the tree line and it’s exhilarating. In one chapter he flies this wealthy passengers over Tumbledown Mountain in western Maine.

One Good Thing brings McGowan’s public service, floatplane adventures and love of storytelling to the public. Many scenes in the book rely on his personal experiences. He has spent ten years as a skydiver and he is a floatplane and backcountry airplane pilot who loves canoeing.

McGowan campaigned for single-payer health coverage in a congressional race in 1990 and has never given up on this bold idea for America.

“To bring single payer to people is the goal of this Robin Hood gang,” said McGowan.

His first, of many book signings will be at the Lakehome Group / Real Estate Office, 75 Main Street Belgrade, Maine from 6 to 8 pm on Thursday June 14th, 2018. Others are planned at Sherman’s of Maine, the dates are yet to be announced.

One Good Thing was published by Polar Bear & Company of Solon. The book is available online including at Barnes&Noble.com, Amazon.com, and at local bookstores by request, or directly from the publisher. It’s 260 pages and costs $17.95.