WILTON – A host of rural Maine characters, a fictionalized Dallas Plantation and a retired Coast Guardsman with the gift of gab will star in a local author’s short story ‘Devious Doings in Dallas,’ which will be released in November as part of the Best New England Crime Stories 2016: Red Dawn.

The popular crime fiction anthology will feature a short story by Sanford Emerson. The owner of a woodworking business and Christmas Tree Farm in Wilton, Emerson recently retired after a 35-year career in law enforcement and corrections in Franklin County, most recently as a probation/parole officer. He came to the county in 1973, after he was discharged from the U.S. Navy and eventually picked up the graveyard shift at the old Franklin County Jail.

Emerson is married to Kathy Lynn Emerson, who has written more than 50 books on subjects that range from historical fiction to mysteries to the romance genre to works of non-fiction. As part of a contest through the Maine Crime Writers website, which Kathy Lynn Emerson regularly blogs upon, Sanford Emerson submitted 16 potential titles of mystery stories, one for a town in each of the 16 counties. One of these, ‘Dubious Doings in Dallas,’ stuck with him.

“The contest fizzled with only two entrants, one of them mine,” Emerson said, “but I suffered the ‘hell’ of literary inspiration and a couple of days later worked up the courage to show 5,000 words to my in-house editor. Her first comment, ‘This is a pretty funny story,’ sealed it.”

A slightly-modified ‘Devious Doings in Dallas’ ended up going to Level Best Books, an independent publishing cooperative, for consideration in this year’s anthology: Red Dawn. The story was accepted in July and survived the first round of judging for the prestigious Al Blanchard Award. 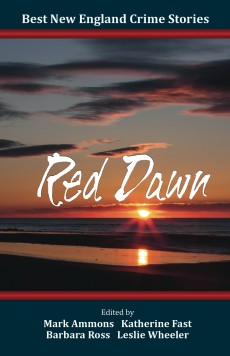 The story is told from the point of view of Bobby Wing, a veteran Coast Guardsman that has retired to Dallas Plantation and been subsequently appointed constable, fence viewer, deputy fire warden and animal control officer. Without any true police powers, Wing must deal with various incidents with only his “knowledge and understanding of his neighbors, his empathy and his gift of gab,” according to Emerson. The stories are presented as if being told to the reader over a beer at Sally’s Motel and Bar and Live Bait and Convenience Store, and (as Emerson puts it) the stories “do tend to go on some.”

Devious Doings kicks off with the discovery of the the Plantation’s least-loved citizen frozen to the floor of his cabin one lovely January morning. In cooperation with a rookie Franklin County deputy who looks like his favorite actress, a Medical Examiner who worked his way through med school as a male stripper and the one-truck Dallas Volunteer Fire Department, Wing uncovers a criminal conspiracy which reaches as far as China (the country).

Red Dawn will be released in November, more information for which can be found here. Meanwhile, Emerson has written a second story, “Deadly Discovery in Dallas,” which is being shopped to the U.S. mystery magazine market. He has several ideas for other stories, Emerson said, as well as perhaps eventually a book.