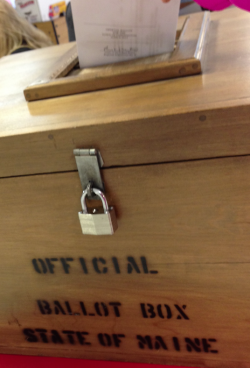 FARMINGTON – Residents of the 10 towns who make up the Mt. Blue Regional School District will head to the polls Tuesday to decide the fate of the proposed 2015-15 school budget in a  referendum validation vote.

This is the second attempt to get the district’s budget passed.

On June 9, the majority of voters from seven of the district’s 10 towns rejected a proposed $32,250,346 budget that was supported by the majority of more than 200 voters attending the district-wide budget meeting on June 1. That proposed budget was $1.2 million more than the last fiscal year budget, which represented an increase of 3.9 percent. The referendum to validate the budget meeting vote was 741 yes and 1,045 no.

After the budget was voted down, school board directors spent the next weeks trimming a total of $206,000 in expenditures from the first budget and voters at the second budget meeting held on June 21 passed the recommended amount of $32,043,907. The new total approved represents an increase of $1,003,291 over the previous fiscal year, or 3.2 percent.

Among the cuts were a world language position at Mt. Blue Middle School, half a math interventionist position, half of the Volunteer Coordinator Program and a portion of the locally-funded school health coordinator position. Supply line reductions were made to the music program and library technology funds, as well as $28,000 removed from the heating oil lines due to projected savings. Other, smaller lines for administration technology supplies and a stipend relating to the Mt. Blue Middle School Show Choir, were cut due to disuse over the past few years.

The Guidance budget was cut $10,000, which is running a surplus at the end of the year. Funds throughout the budget earmarked for substitute teacher pay were cut by $7,500. The contingency account for Special Education, a new item at $50,000, was cut in half to $25,000 and another $13,300 was cut from the locally-assessed budget by adding two items, 2 hours of daily custodial service around lunchtime and a contract to monitor the temperature of the lunch program freezer, to the school lunch budget. That budget runs in the black each year, without any contribution from the local assessment.

The latest budget also incorporates an extra $25 million in state subsidy that was appropriated by the Legislature as part of a 2-year, $80 million General Aid to Education to reduce the education mil rate. That decision was made after the first June school district budget votes. That rate, which sets the amount of money each town must raise to receive subsidy, will fall from 8.41 to 8.23. Last year’s education mil rate was 8.1.  For MBRSD, that extra subsidy represents $301,000 that the towns will no longer be required to raise.

The July 28 referendum validation vote held in each of the district’s 10 towns is a single question ballot with a yes or no response.  A yes vote  approves of the action taken at the July 21 budget meeting and a budget is adopted.  A no vote restarts the budget process, in this case, for a third time.

To give the district’s taxpayers an idea of the amount of the increase to 2015 tax bills, Erin Norton, the treasurer for the town of Starks, provided a valuation comparison for each of the school district’s 10 towns using the Maine Revenue Services Website for 2015.

Norton noted that “when each town’s assessors calculate tax bills there’s a series of formulas and adjustments used to determine actual values. Therefore, this is an approximation of the impact on your 2015 tax bill, and while my numbers may not be exact they should be close.”