The time change has resulted in two grumpy cats and one unhappy dog who are still protesting the new suppertime routine, a week later.

It also left me discombobulated first thing Monday morning, partly because I haven’t taken a screwdriver to the clock on my bedside table to change the time, and partly because I woke up over an hour before my usual time. Or – I woke up a few minutes before my usual time, which is no longer the correct time, due to forces outside of my control. It was all too complicated that early in the morning.

I could have rolled over and gone back to sleep, but I knew we had elections this week, so I opted to sneak out for a quick morning trek through the woods before submerging myself in the affairs of Franklin County. While I enjoy the activity of election week, it can be stressful and doesn’t leave much time for walks and ‘getting lost’ in the woods for a while; proactive measures are required.

I grabbed my camera, neon jacket, and a water bottle before heading out to Reed Brook Falls.

The pre-dawn trip was uneventful. I drove out of the light drizzling rain by the time I passed Tuft’s Pond Road, and the sky was turning to pale blue by the time I reached the newly remodeled trailhead and parking area for Reed Brook.

Reed Brook Falls is a sweet little trail, just over .6 miles one-way. There is some incline, and it is a forest floor trail with roots and rocks to navigate, but it is a well-maintained and pretty family-friendly trail.

From the trailhead, it’s a short wander to the brook. I passed over a couple old logging tracks, with raspberry brambles reaching long fingers to snag my coat sleeves as I walked by. I picked a couple berries off this bramble back in late August, but now the berries and leaves are gone. The thorns stuck around.

Some large bird in the top of a hemlock startled as I passed by and for a moment all I could hear was the dull, heavy thump of wings right overhead. It flew away unseen and – after the initial take-off, largely unheard – into the mist. I suspect owl, but I have no real evidence one way or another. 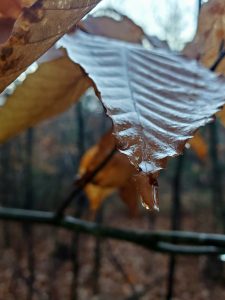 In September when I walked this trail, the maple leaves were a red carpet under my feet. Now they are a dull purple background for the beech leaves that have fallen.

The beech trees are the last holdouts of autumn. Some will still cling to their leaves through the winter, resisting the wind and snow that tries to strip them of their gold and bronze foliage, until the first new buds of spring push away the remnants of the old year.

It rained during the night – I woke briefly around two in the morning to the sounds of a torrential downpour and remember thinking ‘I’m glad I’m not out in this’ before drifting off again – and the sounds of Reed Brook reached me quite a bit before I could see the water itself. Swollen with the rain, Reed chattered and sang its way down the slopes.

For most of the way up to the falls, the trail follows alongside Reed Brook. It climbs away in a couple places, but always comes back to the water. Dozens of short steps make micro cascades in the brook as you climb up to the falls themselves.

A short ways from the falls, the trail splits in two. The Stone Steps, to the left, climb up the side of a hill. Continuing more-or-less straight on, the winter bypass is recommended when the trail is icy.

Due to the wet, slick leaves underfoot, I opted for the winter bypass. It climbs the same hill as the steps, just a different route, and you end up in the same place.

The last little stretch up to the falls is the steepest and the rockiest, but nothing like the High Peaks surrounding this trail. It is all relative to the rest of this trail.

At the foot of the falls – a 30-foot rock face with water pouring over from Reed Brook, and farther to the west, Shiloh Pond – there are some large rocks that are good for sitting on. I like to bring my lunch up here sometimes, or just sit and listen to the water for a while.

My dad is a math teacher. When I was a kid, he had math classes at the house for homeschool students, and hosted practices for the high school math team. As such, my parents had a 4-foot by 8-foot whiteboard in the living room.

(It took me a very long time to realize that most families do not have such things in their living rooms.)

The whiteboard had phone numbers in one corner, grocery lists, reminders, chore lists, math problems, questions, and a varied assortment of notes and drawings scrawled all over it. (For years there was an extensive panel of drawings on the wall below the whiteboard; this was the result of whiteboard markers left within the reach of small children, mostly myself.)

Sometimes, especially when there’s a lot going on in the world, I think my brain resembles that chaotic whiteboard, and the easiest way to wipe it clean and refresh it is to go hang out with some trees and water for a while. 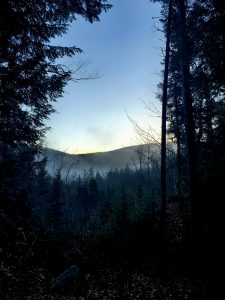 This particular Monday morning, I neglected to bring breakfast with me and a quick forage in the depths of my camera bag revealed nothing more than the empty wrapper from a snack bar, so I packed up my camera and wandered down a bit sooner than I might have liked. The sunrise was almost exactly opposite the waterfall and as I walked back down, I kept seeing glimpses of the trees on the neighboring hills turning gold in the new light. Fog came thick off the Carrabassett River, but the sun peeked through, lighting the shadows under the trees. I stepped away from the trail and climbed a little hillock to peek through a gap in the trees for a better look at the sunrise.

After leaving the brook and weaving my way through the clingy raspberry bushes again, I found myself confronted by one irate red squirrel.

Considering that they are on the smaller side of woodland creatures, red squirrels are surprisingly fierce and opinionated. This particular one was decidedly unhappy about my intrusion into his space, and let me know about it in no uncertain terms. I don’t speak squirrel, but I rather think I’m glad of that.

I paused to take a couple photos and talk back to him, then continued on my way. The little fellow followed me for a ways, still carrying on at the top of his lungs.

It is his world, but it is my world too, and there can be room for both of us if we allow it.

Inspired by the author’s love of Mount Abraham, or Mount Abram for locals, Thoughts from the Summit is a column celebrating and exploring the great outdoors in and around Maine’s High Peaks region.