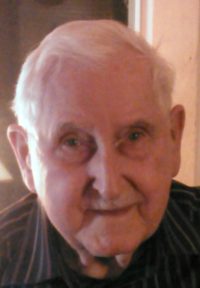 POLAND – The Reverend Walter R. Brown passed from God’s earthly kingdom to be with our Lord in Heaven in the early morning hours of Thursday, May 13, 2021. He left us at the age of 91 after finishing his course of faith, serving the Lord throughout many church parishes in the state of Maine. Walter, serving alongside his wife of 65 years, Hope L. Brown, lived a long and full life, serving the Lord together within the fellowship of so many disciples in the United Methodist Church.

Walter was born on Feb. 4, 1930, to Charles and Alberta Brown, in South Portland, the youngest of four children. Walter grew up with his sisters, Lillian, Lucy and Helena. Living through the depression of the 1930s and World War II, Walter learned the meaning of sacrifice and hard work. He and Hope met in high school and together they went to college in Boston. Walter finished his studies at Bangor Theological Seminary. Walter and Hope were married in 1955. Walter entered the ministry of the United Methodist Church, serving at his first parish of Union and Searsmont in 1955. Walter and Hope went on to serve the parishes of Dover-Foxcroft (1961), Randolph/East Pittston/Chelsea (1965), Livermore Falls (1971) and the connected cooperative parishes of Winthrop, Wayne and others. From there they moved to serve the parish of Farmington/New Sharon (1974), Readfield (1980), and Cape Elizabeth (1986).

Walter and Hope “retired” from the ministry in 1992, to spend a year in Germany visiting many of their German friends they had made through the years of the German-American Parish Exchange. When Walter and Hope returned to the U.S., they served four more parishes as “retired” pastor and wife, leading the congregations of Friendship, Bethel, Bolsters Mills and Farmington. They officially retired in 2015, due to health concerns.

In 1956, Walter and Hope welcomed their first child Lauretta into the family of “B’s,” which would gradually expand to four more children: Corbette in 1958, Matthew in 1960, Lisette in 1962, and Nicolette in 1964. The children all got used to the idea of pastoral itineracy, frequently moving from one church, community and school to another as the family served churches in Maine. The one constant in the family’s life was the camp at their beloved Empire Grove in Poland. The Browns arrived in the 1960s in a school bus that Walter converted into the family camper for the seven “B’s.” The family camped for several years in the bus, affectionately known as the “Bee’s Hive” until Walter, Hope and the little “B’s” began building and adding onto the camp near the entrance to the “Grove.” The camp has seen a lot of changes through the years, and it became Walter and Hope’s permanent residence in 2015.

Walter will also be missed by his niece, Lorraine Hupper (daughter of Walter’s sister, Lillian Stanley) and her husband Neal of Tenants Harbor. Walter married them in 1968. Lorraine was one of the many willing travelers and exchange participants during the German-American Parish Exchange. Her father Clyde, a lobsterman, as well as Lorraine’s husband Neal, were probably the main reasons that Walter enjoyed the sea, in general, and eating lobster, specifically.

In addition to their extensive travels together, their ministries at Mechuwana Methodist Camp in Winthrop and at Empire Grove, Walter and Hope enjoyed many summers together sailing near Bailey and Orr’s Island, in their 25-foot sailboat “Traumschiff” (German for “dreamboat”). Walter was a confident, but cautious skipper, who liked to sail more often on a “level keel.” He and his first mate, Hope, had several “discussions” about how they should sail, but in the end, the captain was always right.

Walter and Hope were involved in the German-American Parish Exchange Program beginning in the late 1970s. Walter lead the American side of the exchange program. He and Hope brought folks to Germany from many American church parishes, from Maine to West Virginia, and arranged host families for the Germans to stay with when they traveled to Maine and other parts of New England. Walter and Hope’s last trip to Germany was in 2014. Through the exchanges, Walter, Hope and the family have made many lasting friendships with our German “cousins,” including the Hott, Hirzel and Boss families and many others. Walter and Hope have been blessed over the years to travel and stay with friends in Germany and to be considered “family” and honorary grandparents to many of the children involved in the exchange program.

A celebration of Walter’s life will be held outdoors on Wednesday, May 26, 2021, at 1 p.m. at Empire Grove, near the Fellowship Center and Preacher’s Stand. Tents will be provided for protection from the sun (and rain). Attendees are advised to dress appropriate to address the current COVID-19 guidelines for the outdoor venues and to be prepared for the Maine State Bird – mosquitoes. Visiting hours with the family will take place on Tuesday, May 25 in the Empire Grove Chapel from 5 to 7 pm. The address of Empire Grove is: Front Avenue, Poland, Maine 04274 (off Empire Road). In lieu of flowers, suggested donations could be made to the Empire Grove Camp Association, Mechuwana Methodist Camp, the United Economic Ministry in Salem, or any other ministries that Walter was involved in throughout his service to the Lord.

Arrangements are under the care and direction of Dan & Scott’s Cremation & Funeral Service, 488 Farmington Falls Rd., Farmington, ME 04938.