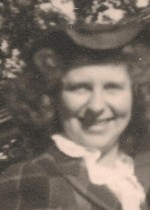 She was born on Aug. 14, 1917, in Wilton, the daughter of Earl E. and Hazel M. (Marble) Robbins. She was a graduate of Wilton Academy and continued her education at Bates College where she earned a degree in English, graduating in 1939.

She was a teacher at Wilton Academy in the early ’40s and also taught in Worcester, Mass. On Oct. 9o, 1944, she married John Adamo in New York City, N.Y. When they relocated back to her beloved hometown, she began her career in journalism, writing for the Wilton Times, The Franklin Journal and for many years was a well respected local correspondent for the Lewiston Daily Sun.

Ruth’s life work was in pursuit of stories that reflected the truth of her local community. Her vocation was also her avocation, and as a local historian she researched, documented and eventually published, The History of
Wilton in 1971. Her husband, John, in his retirement, also joined her in covering local stories – she, with pen and paper in hand; he, with the car keys and his camera. The finishing touches to their stories took place in the hub of her home, her kitchen table.

In addition to writing, she enjoyed reading, music, the arts and piano, and making a comfy home for her house cats.

She is survived by a daughter, Michelle Ouellette of Lisbon Falls and her children Torri-Jean Jones and her sons Miles Gannon and Drew Gannon of Lisbon; and Jesse Jones and his wife Sandra and their daughter Maura Jones of Lisbon Falls, and her daughter, Starr’s partner, Beverly Francis of New Portland.

Family and friends are invited to attend her funeral services on Tuesday morning, Jan. 14. 2014 at 11 a.m. from the First Congregational Church, UCC, Main St., Wilton, with Rev. Margaret Proctor officiating. Following services, all are welcome to attend a reception in the church vestry. Remembrance gifts may be given to the Franklin Cty. Animal Shelter 550 Industry Rd., Farmington, Maine 04938.

Tributes and condolences may be shared with her family on her memorial wall at www.wilesrc.com. Spring burial at Lakeview Cemetery, Wilton. Arrangements are in the care of the Wiles Remembrance Center, 136 High St., Wilton.