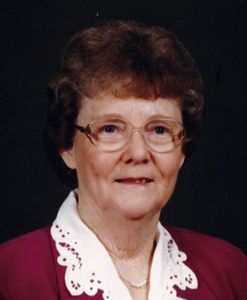 Stanger Brann and Lester Guy Brann, and raised from an early age until her high school graduation by her parents and “Aunt” Vernie Morrill in New Sharon, Maine. She was educated in and graduated from New Sharon High School, and continued on to earn her cosmetologist license from Pelletier’s School of Cosmetology in Lewiston, Maine. She married her high school sweetheart Lloyd Heald on October 7, 1953. They made their home near Fort Bragg, North Carolina until Lloyd’s discharge from the Army in 1955, then traveled all over the southeast with the Dixie Construction Co. out of Birmingham, AL for whom Lloyd worked until June of 1960. They then returned to Maine and settled with their two oldest children, son Linwood and daughter Linda, in New Sharon. They later welcomed two more children, son Larry and daughter Leslie.

Vernie was a member of the United Methodist Church in New Sharon, and enjoyed singing in the church choir and holiday cantatas. She was a member of the Woman’s Society and was most proud of her work running the church’s food booth, which she called her “baby”, at the Farmington Fair from the late 1960’s to 2012. She was also a member of Messalunskit Chapter #170 O.E.S. and enjoyed numerous years serving as Worthy Matron and Grand Ruth. Besides knitting, crocheting and crafting, her favorite pastime was raising toy and miniature poodles, as well as English springer spaniels under the kennel name Vi-Luv, short for Vernie and Lloyd’s O.E.S. nicknames “Vivacious Vernie and Loveable Lloyd”.

She will be missed by her family and friends, but she will always be in our hearts. The family would like to give special thanks to all who helped Vernie before and after Lloyd’s passing.

A graveside memorial service with an Eastern Star service will be held on Saturday, October 30, 2021 at 1:00 p.m. at the Village Cemetery in New Sharon with Rev. Laura Church officiating. In lieu of flowers, donations in Vernie’s memory may be sent to the United Methodist Church, c/o Rosemary McCormick, 198 Lane Road, New Sharon, ME 04955 or Messalunskit Chapter #170, O.E.S., PO Box 96, New Sharon, ME 04955. Condolences and tributes may be shared with the family in her Book of Memories at www.wilesrc.com. Graveside and cremation services are being cared for and provided by the Wiles Remembrance Center, 137 Farmington Falls Road, Farmington.