In 2015, former Senator George Mitchell, released his first book in 16 years, The Negotiator. It was his first and so far his only multi-subject memoir. In it, he wrote, “This is not a complete biography.” Instead, it was merely a “telling of some favorite stories about my very fortunate life.”

Now, just over a year later, noted columnist and former newspaper editor Douglas Rooks, has filled much of this void in his own first book, Statesman: George Mitchell and the Art of the Possible.

At nearly a quarter of a million words and some 532 pages it will likely be the lengthiest book ever written by or about the Waterville native who rose from humble origins to become one of the more towering leaders of the last 50 years. Rooks should be commended for the prodigious research, analysis and skillful writing. It’s certainly a subject that deserves the recognition this work affords him.

In effect, it will likely be a Gone With the Wind among popularly published studies of the former U.S. Senate Majority leader and Northern Ireland peacemaker. It does not have quite the drama and sensation of the 1939 epic, however, but like the nearly four-hour-long Civil War movie, there are some portions Rooks that might well have left on the cutting room floor. (Though there some broadcast documentaries and similar portrayals of Mitchell, there has not been a filmed dramatization of his life, one for which the likes of Dustin Hoffman would be suited for the lead role.) 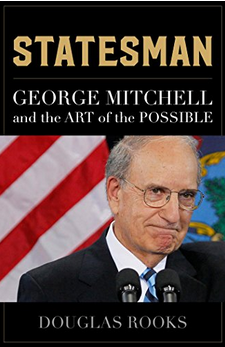 One redundancy, for example, is a comparison of Mitchell’s temperament with that of his mentor, Senator Edmund Muskie. Muskie is portrayed as typically shouting and screaming to his private professional associates while Mitchell is cast in comparable settings as the one keeping his cool. Though the comparison is probably apt, Rooks goes a little bit too long with repetitive quotes and illustrations on the same point at different parts of the book, plunging the sword in and also twisting it.

The portrayal of Muskie as being inferior in this as well as other respects to Mitchell is typical of another of the book’s occasional tendencies, namely, to build Mitchell up by tearing others down. Mitchell’s predecessor as majority leader, Robert Byrd, for example is unflatteringly portrayed not only on their differences in management style and on environmental issues but also in one instance even to the point of poking fun at Byrd’s hearing. The predilection of the book to do this is a bit gratuitous. The Mitchell star should be allowed to shine in its own light without having to create such a shadow over those of others.

A high point is Rooks’ ability to coordinate seemingly disparate inspirational episodes. One instance of this is his synthesis of speeches made by three of the leading Maine public figures of recent generations. He ties together as expressing common themes Margaret Chase Smith’s 1950 Declaration of Conscience address, Senator Muskie’s 1970 election eve repudiation of Nixon administration campaign lyrics, and Mitchell’s moving and brilliantly reasoned face off with Lt. Colonel Oliver North at the Iran Contra Hearings in 1987. What they have in common, namely, a summons to the higher sense of American integrity in the face of meretricious challenges is one of several noble moments in the book to which we can be grateful to Rooks for so articulately provided.

Another memorable trilogy that also bridges multiple decades well depicted by Rooks is the image of “security walls” in Mitchell’s life of public service. A first was in Berlin where Mitchell was stationed as an army officer in the ’50s not long after the city had been partitioned between east and west – though a bit before the famous Berlin Wall itself was built. A second was in Belfast, Northern Ireland, the scene of Mitchell’s successful negotiation in the 1990s of an enduring peace settlement. The third was in the Middle East where at various times in the years of his diplomacy there Mitchell encountered walls that divided former Palestinian domains in the West Bank.

The book is, however, blemished by a number of factual slip-ups that could have been cured by more careful fact checking or proof reading. Among them:

* Former Vice-President Hubert Humphrey is cited as a senate opponent of a proposed 1986 Mitchell tax reform amendment even though the former Minnesota lawmaker had been dead for eight years.

* The 1988 shooting by British officers of three IRA members at Gibraltar is referred to as resulting in the death of “three IRA men,” when in fact one of the three victims was one of the leading martyred women in IRA history, Mairead Farrell.

* Rooks has Senator William Hathaway giving a speech at the 1968 Democratic National Convention opposing a Muskie favorite son candidacy and supporting Robert Kennedy when in fact Hathaway’s stance at that time would have not been possible given that the Chicago convention occurred over two months after RFK’s assassination. Instead, Hathaway made this pitch in the spring at the state convention in Maine.

There is hopefully room in the Mitchell shelf – both Gone With The Wind author Margaret Mitchell and Senator George Mitchell – at libraries and bookstores throughout the world for this new book. I do hope a somewhat revised version will be issued that pasteurizes some of the bumpy textures which seem to blemish this initial edition.

The book does, however, cover a lot of territory and is an ambitious undertaking. These are a few more elements of it that invite additional comments which I hope to cover in my next column.

Paul Mills is a Farmington attorney well known for his analyses and historical understanding of public affairs in Maine. He can be reached by e-mail at pmills@myfairpoint.net.