Good day. I would like to give you a quick update on what is going on with the CMP’s New England Clean Energy Connect. Better know as the Corridor.

1. Permitting. I realize you continually hear the drum beat the Corridor has all its permits. Let’s look a little deeper into these permits. First the DEP permit and PUC certificate was issued under two governors that support the project. Do you think there would be a different result? Recently CMP has applied to the Board of Environmental Protection for a “minor” amendment which is over 700 pages long. The DEP commissioner decided the project was not of statewide significance since it did not have significant public scrutiny. Fortunately, the public corrected this perception by sending in over 170 emails and sent a petition signed by 700 Maine citizens to the Board of Environmental Protection (BEP) objecting to this decision. As a result, the BEP is reconsidering this recommendation. Last week, our own Joint Standing Committee of Environment and Natural Resources weighed in on this decision and is requesting they be kept abreast on the board action.

Now let’s look in to the Federal Permits. These are the Army Corps of Engineers (Corps) and the Department of Energy’s Presidential Permit. The Corps permit never went out for public comment before it was signed. In fact, the only comments considered for the last months before issuance was information from CMP. The Corps has ignored a request by the Penobscot Indian Nation for a Government-to-Government meeting as required by law.

The Presidential Permit was issued as President Trump left office without any public comment. This is even after Sen. Susan Collins was told the public would have 30 days to review and comment on the permit. The Environmental Assessment, a critical part of the permit, was issued on Jan. 14, 2020. The Presidential Permit was signed by the DOE on Jan. 15, 2020. Fortunately, Sen. Collins and Congressman Jared Golden have stepped up to ask why this happened. Even the Biden Administration is asking for a review of this permit.

Obviously, this lack of public scrutiny is of grave concern. More egregious is the fact that CMP sent $240,000 lobbing the Corps and the Department of Energy to get these permits. They paid to get the permits written the way they wanted them. We, the public, were never allowed a voice.

2. Jobs: CMP has started construction on the Corridor in the western part of the state. (They cannot begin work on the first 53 miles because of a Federal Court Injunction.) They are making a big deal out about hiring 300 Mainers. Yet the company clearing the line is from Wisconsin. The company erecting the poles is from Mississippi.

Most disheartening is the line clearing is being done by Northern Clearing, a Wisconsin Company. This comes at a time when our Maine loggers are suffering from a lack of work.

What we all must remember if this project is completed there will be only 38 full time jobs remaining. While various wood product industries will loose over 200 jobs in Franklin County alone.

3. Financial benefit for Maine: In the last few weeks CMP has continued to banter huge dollars that will be helping Maines economy. It is time these numbers be put into a financial perspective and talk about them in today’s dollars.

All of you have attended town meetings. When the town road budget, usually in the $100,000 range, comes to a vote it pass pretty easily. But when a small item, the $100 little league budget, comes to a vote there is great debate. Why? Because all of us can comprehend what $100 is, we have difficulty getting our hands around what $100,000 dollars really means.

CMP continues to use huge numbers on the benefit of the Corridor. Recently they told you the project is worth $1.315 billion to the State of Maine. Sounds like a lot until you put in prospective for each Mainer. I did. Base on a 20-year Corridor benefit window without discounting the dollars to today’s value Mainers will receive a benefit of $10.34 per month. If you discount the Corridor benefit to today’s dollars each Mainer will receive a benefit of $3.57 or the equivalent of a gallon of milk per month for 20 years. All the while CMP will make $5,000,000 per month and HQ will make $41,000,000 per month for the project duration.

4. Renewable Energy: CMP continues to tell you this project is all about renewable energy. Yet, their one report tells us the renewable industry will lose $400,000,000 over the first 15 years of the Corridor’s operation. I think you would agree there are few businesses that can survive this financial loss.

Most recently you have read CMP does not have the capacity to handle the many solar projects. Why is this a problem now and not when the projects were initially proposed? We all know there is going to be a PUC investigation into what happened. The results will be very interesting.

If CMP was so interested in greenhouse gases why did they fight Senator Carson’s Corridor Greenhouse gas bill last session with a boat load of lobbyist? We would have known once and for all if this project really reduces greenhouse gases.

5. Petition: I am sure you know the opposition to this line handed in a citizen’s petition with over 80,000 signatures from over 500 communities in February. It is 17,000 more signatures than required to place it on the ballot. CMP did not challenge the signatures. The Secretary of State has validated these signatures and sent it to the legislature for a hearing.

This new petition directs the Legislature to take action. The first petition was invalidated by the Maine Law Court because the petition directed the Executive branch of government to act. You will have this before you in November.

6. Polling: Attached is the polling information you might find interesting. People know about this project and the majority is against it. The support to stop the line goes through the political spectrum and regions of the state. Why? 1. It will dramatically change the forest in western Maine. 2. There is no economic benefit for Maine. 3. They do not trust CMP.

I appreciate your time in reading this update. If you have questions feel free to email me or call. 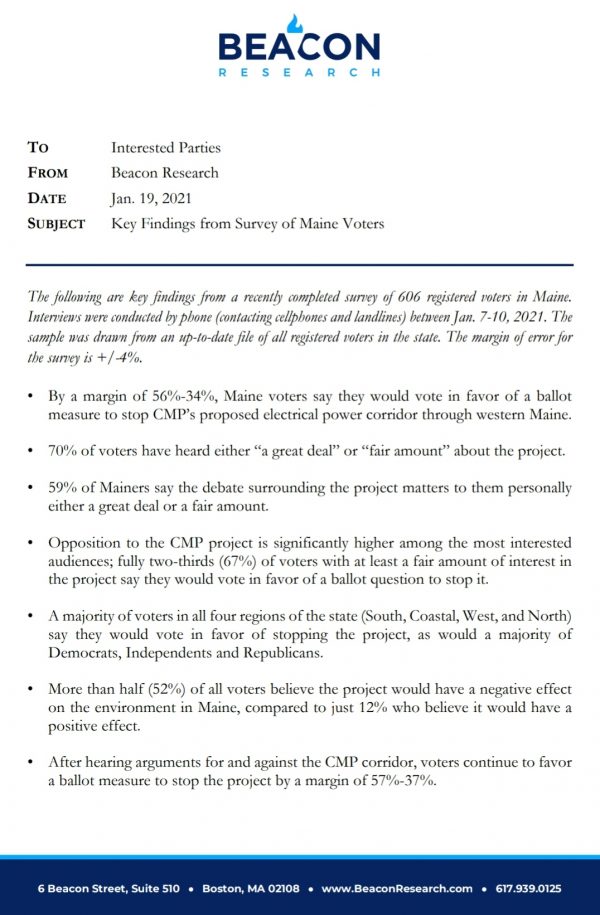 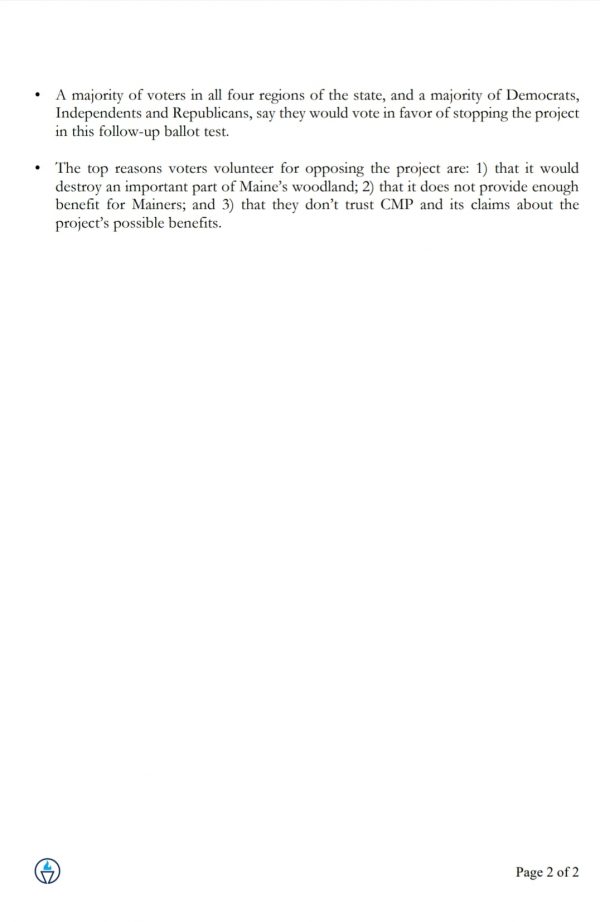