November 11 is the day we honor vets, but we should honor them any chance we get. EVERY DAY SHOULD BE VETERAN’S DAY! – here’s why.

What is a veteran? There are many definitions by agency. Any person who serves on active duty, and receives other than a dishonorable discharge.

Simpler for me – any person who takes the “oath” and serves honorably, in peace or war, in combat or support. Remember it takes 7-10 rear-echelon personnel to support the front-line personnel.

Here’s why we should honor vets any time we can.

My first impulse is to say we are fortunate. But I think of the families and friends of these 1.3 million, about equal to Maine’s population, and think; Not SO.

What war had the most killed in action? The Civil War; about 660,000, with both sides Americans. Second most? WW2, about 500,000. By the way: we had about 16 million Americans in uniform during WW2. Also, 1.8 million Purple Hearts. Much more pain and suffering. 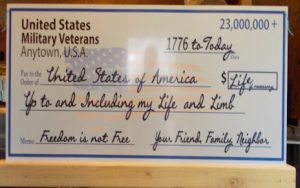 Every Veteran who serves signs a “blank check.” The amount is up to and including “life and limb.” Every veteran who takes the oath and stands duty fills out this check, some get cashed, fortunately, most don’t.

I also want to mention firefighters and law officers too, have a similar blank check!

Our brave military men and women stand guard 24 – 7 – 365 around the world, so we can pursue our life, liberty, and pursuit of happiness in safety. Their peacetime training is dangerous; aircraft crashes, injuries, equipment failures, terrorists, etc. What about the enemy with the loaded rifle across the DMZ?

This is why EVERYDAY SHOULD BE VETERAN’S DAY.