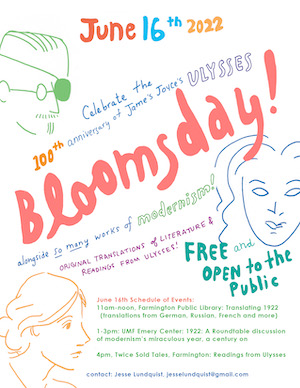 FARMINGTON – James Joyce’s Ulysses will be celebrated at three locations next week, in recognition of the novel’s 100th anniversary.

June 16, 1904 marks the day when James Joyce’s novel Ulysses takes place. This day is now celebrated the world over as “Bloomsday” after the title character, fictional Leopold Bloom. The novel itself was published in the great year of Modernist art and especially literature, 1922, which saw such landmark publications as T.S. Eliot’s The Waste Land. The year was a fruitful one internationally: German-language poet Rilke released his Sonnets to Orpheus, Russian poets such as Mandelstam and Pasternak put out major collections, French poet St.-John Perse published the opening of Anabasis.

The year 1922 pulsed with a strong poetic energy. We will celebrate the centenary of these poets and artists with a series of events held throughout Farmington, including talks, readings, drinks, and food.