After her book Made For You and Me: Going West, Going Broke, Finding Home was featured extensively on National Public Radio, and praised roundly in book reviews around the country, Maine author Caitlin Shetterly felt it was time to step up and do a hard hitting Daily Bulldog interview. Caitlin will also be doing a reading from her book on October 27th at DDG Booksellers in Farmington.

Kenny: If you could choose a book for a college campus one book one read (other than Made For You and Me) what would it be?

Caitlin: Well, OTHER than Made for You and Me: Going West, Going Broke, Finding Home, which of course I’d choose because I think college age kids are getting out of school these days with huge challenges facing them, I guess I’d have to say The Grapes of Wrath by John Steinbeck. So much of Steinbeck’s story about the Joads’ journey through The Depression is so easily transferable to today–and so many of the warning signs in that book are now near catastrophes in America.

Kenny: Did you do appearances in California. If so what was that like?

Caitlin: I did. This summer I went for a week up north and then down south. It was fine–better than fine. People really related to my story–were hungry for it, actually. And, also, it’s good to go back somewhere that you feel has pummeled you–small town, city, restaurant or whatever–you’ve got to get back up on the horse and face it in order to become a stronger person. Didn’t Eleanor Roosevelt say, “No one can make you feel inferior without your consent?”

Kenny: Did the transformative experience you chronicle in Made For You and Me change the way you felt about any favorite books. 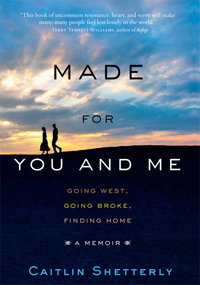 Caitlin: You know, I think the thing that happens when you publish your own book that you wrote, that your blood, sweat and tears went into, is that you just start to love the “object” of the physical book–the “art object,” even, of this animate, inanimate object. Holding it in your hand, you imagine someone curling up with it on a dark night and feeling less alone in their world because you are there. And I imagine my book, always, as a dialogue, which is why I have gone to such great lengths to make myself accessible so that people can email me and I can continue the conversation with them. If anything, knowing the hard work that goes into each and every word and what it takes to make something that truly transcends–and then the beauty of it coming out between two covers–well, it makes me cherish my favorite books now more than ever.

Kenny: Which passage of your book have your re-read the most times?

Caitlin: This is a great question–one I’ve never been asked. You know, when I do readings, there’s this huge part of me that just wants to sit there and read the whole thing out loud! I just love the journey of the story–still, and even though it happened to me!–and, also, I just am so touched by the gifts of love and humor I was given during a tough time. Also I love the idea of the book becoming an oral narrative, at least for a night. But, I think, more than anything, I love re reading the parts about my husband, Dan. His courage and his loveliness during a time when we were in economic free fall still touches me so much. I will say, quickly, however, that there is one section of the book that I cannot touch–even the pages–it was too hard a time. I won’t give away which part this is, but I think readers will know it when they read it.

Kenny: Thank you so much Caitlin. We look forward to seeing you on the 27th!