Kathleen Elva Morton, 91, passed away peacefully with her family by her side, on the morning of January 7, 2022 at her son James’ home in Rumford. Until recently, she had resided with her daughter, Sharon, in Phillips. 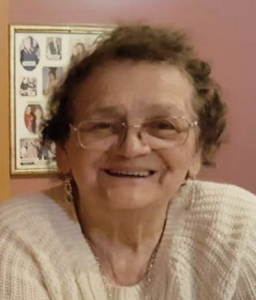 Kathleen was born on March 6, 1930 in Searsport, Maine, the daughter of James “Oscar” and Amelia (Marston) Palmer.  She grew up in the depression and learned at a young age to run a household and care for her siblings and later for her own children. Her life was centered by her family.

Kathleen was married to Arthur Cole on August 17, 1946. Together they raised five sons in Andover. Although they were divorced years later, they remained friends until Arthur’s death in 2009.

On December 6, 1967, she married Hugh Morton of Andover. They were married for 37 years and raised three daughters. They made their home in Rumford and then later in Roxbury. When Hugh passed away in 2005, she returned to Rumford.

Kathleen was known for being everyone’s mom, auntie or grandmother. Her door was always open and she was welcoming.  She was the family matriarch. Many sought her for advice and support. She liked to cook. She always had cookies, cake, bread, rolls and biscuits ready for company. No one walked away hungry. She loved to knit, crochet and sew, too.  She was happiest when she was doing for others.

Kathleen especially liked being a member of the in Rumford Eagles Club. You could see her there on Thursday nights to listen to her nephew, Noel and friend, Don play. The moment she walked in the door she would be surrounded by others. At the Eagles, she felt like a celebrity. She loved being the center of attention. She would be seen sipping her two Tequila Sunrises and dancing. She especially liked when Noel and Don performed “The Walk of Life.”

In recent months, she liked to listen to Karaoke at the Inn on Winter’s Hill in Kingfield where she was equally adored.

Kathleen had a large family and is survived by sons, Arthur Cole Jr, James Cole and companion, Paula, all of Rumford, Elmer “Pete” Cole of East Andover and son, Raymond Cole and wife, Shirley of Standish. She also leaves behind three daughters, Kathy Morton Cottle and wife, Robin of New Portland, Sharon Morton Dudley and husband, Dana of Phillips, and Susan Morton and companion, Rich Gay of South Paris. She is also survived by her daughter in law, Carmen Cole of Standish.

Kathleen made her family promise that they would have a joyful party with fun stories and dancing. Plans are in the works for just that later in the spring.

“Oh, Dear.” What will we do without her?

We will go on living life to the fullest because that is what she wanted. She taught us to be strong, love, and forgive often. “We are lucky and we don’t know it.”