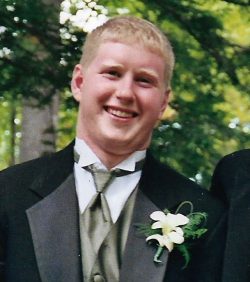 Shane was the youngest of four children. He moved to Maine at age three with his mother and three siblings, living first in Strong, then moving to Phillips, but Shane mostly grew up in East Dixfield. He graduated from Dirigo High School in the class of 2004. Shane was an avid baseball enthusiast, from playing the game and loving pitching, to watching the Boston Red Sox every chance he got.

Shane loved movies and music and playing the guitar. He loved to make people laugh, whether he knew you or not, he could always put a smile on your face. He was the best son, brother, uncle, or friend any of us could ever ask for. Shane had the best heart and would give the shirt off his back for anyone he cared for, and he saw the good in everybody.

Shane leaves behind his siblings; Kelie Legere and her husband Tim of Strong, Sandy Agren and her husband Dan of Strong, and William Appleby and his fiancé Trish of Colorado; his niece Aidyn Legere of Strong and his nephews Nathan Walli of Phillips, Isaiah Agren of Kingfield, and Logan Donovan-Legere of Strong; many aunts, uncles, and cousins all around Massachusetts and Maine; his lifelong friend to the end, Justin Marigan and family from Phillips, along with Shane’s Godmother Rita Riordan and family of Brighton Mass.

Shane was preceded by his parents John Donovan and Diane Donovan, his aunt Maureen King, his niece Casey Appleby-Kelley and both sets of grandparents, Donovan and Babbin.

A memorial service will be held on Friday Dec. 3, 2021 at 1 p.m. at the Wiles Remembrance Center: Adams-McFarlane Chapel 137 Farmington Falls Rd. Farmington, with Pastor John Evans officiating. A kind word may be left in his Book of Memories at www.wilesrc.com.