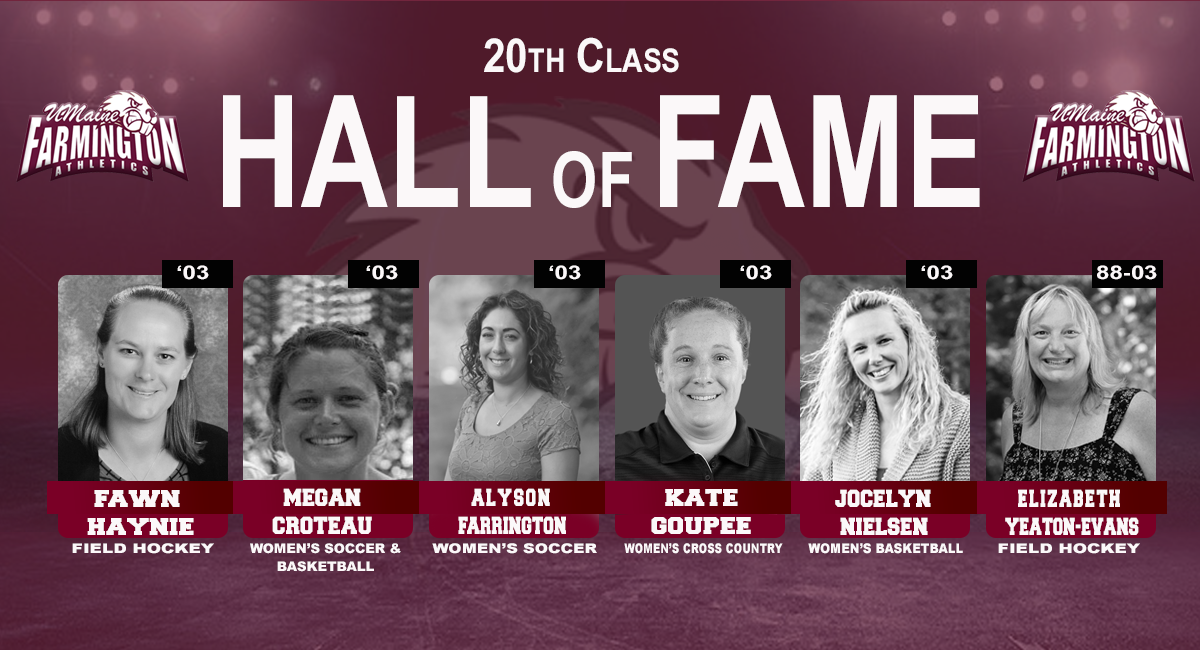 FARMINGTON – The University of Maine at Farmington Athletics is proud to announce the candidates who will be inducted into the next cohort of the UMF Athletics Hall of Fame. Five alumnae and one former coach make up a historic all-female cohort.

The alumnae include former roommates and teammates across four sports, as well as one athlete that played for the coach being inducted. Julie Davis, Director of Athletics, Fitness & Recreation, drew attention to the nominees as being representatives of the rise of UMF women’s athletics in the former Maine Athletic and Sunrise Conferences.

While the traditional fall honor event has been postponed, UMF wished to begin celebrating the honorees with this announcement. Details regarding the actual event are to be determined regarding a time and place after the new year.

Fawn Haynie (Albert) ’03 – A four-year defensive marvel in the cage as a goalkeeper for the UMF field hockey team, and an exceptional student, majoring in Community Health School Health Education. She also earned her coaching certificate at UMF. Fawn is currently a health educator and field hockey coach at Skowhegan Area High School in MSAD #54.

Megan Croteau (Woodcock) ’03 – Excelled four years leading both women’s basketball and women’s soccer to conference success. She earned national recognition in Soccer. Megan was also a strong student majoring in Community Health with minors in School Health Education and Coaching. Megan went on to earn her Master’s in Public Health from West Chester University. Currently, Megan is a registered nurse at Maine Medical Center in Portland.

Alyson Farrington (Pontbriand) ’03 – Was an outstanding keeper for the women’s soccer team for four years, she was an excellent student majoring in Biology with a minor in Chemistry. Alyson also received her master’s at the University of Southern Maine in Immunology and Applied Molecular Biology. Currently, Alyson is an assistant instructor in chemistry at Bates College.

Kate Goupee (McGuire) ’03 – Led the women’s cross country team to conference and regional success, an NAIA national championship qualification, while excelling with a dual major in secondary education and history, plus earning a coaching certificate. Kate is currently the head men’s and women’s cross country and track and field coach at Husson University.

Jocelyn Nielsen (Sawyer) ’03 – Dominated in the paint on the basketball court for four years while majoring in Secondary Mathematics. After graduation, she taught math at Lawrence High School in Fairfield Maine. She is currently busy trying to keep up with a couple part-time jobs and their three children, who are also involved in sports.

Elizabeth Yeaton-Evans – An extremely successful UMF Field Hockey Coach, (1988 – 2003) Beth led the program through the early evolution of collegiate championships in Maine. Along the way, Beth reached the conference championship six years while being crowned champion five times. Beth has been a lifelong educator and strong advocate for women’s intercollegiate sports and it’s value in developing young women. “Coach Evans” is currently a Lecturer and Field Supervisor for student teachers in the much-acclaimed education program at the University of Maine Farmington.