A New Year promises change, and nowhere is change more dynamically an issue than in the static landscape of an OCD sufferer’s mind. It is hard to imagine that the unique potential  of an OCD first person narrator to expand on the concept of interior world building will ever be more powerfully realized than it is in Louise Gornall’s Under Rose Tainted Skies. Gornall channeled her own struggles with OCD into the book’s narrator Norah, and the breathtaking intensity of the reading experience is a tribute both to its authenticity and to Gornall’s skill as a writer. Norah’s derailed quest for normalcy, and the insertion of change into her regulated world has dramatic consequences which both mirror and explore more traditional notions of  thriller like action and the interplay of fantasy realms with the real world.

Louise was kind enough to answer a few questions for us to help explore the dimensions of her fabulous debut!

Kenny: It was highly engaging to have simple plot elements, such as Nora’s mother’s hospital stay, or getting a package into the house, transmuted into a thriller – like scenario due to her OCD. Do you think of the book as a thriller in any sense?

Louise: Funnily enough, this isn’t the first, second, or even third time I’ve heard this, though it still comes as a surprise. I never considered Rose to be a thriller, but then I was heavily focussed on the embarrassment that came with spilling all my real life secrets. See, most of what Norah goes through, I’ve been through myself, and my quirks/rituals were something I’d  kept guarded, under lock and key. For a long time, it never occurred to me that my behaviours were anything more than embarrassingly absurd.

Kenny: There were times I felt a desire for a second first person voice, for hearing Luke’s voice for example, in part to provide a breather from Norah’s claustrophobic intensity. But I came to realize that staying locked within Norah’s voice was putting me squarely within her experience, and perhaps that was very much the point. Did you ever consider a second voice?

Louise: I didn’t. In fact, Luke was unintentionally underdeveloped when I handed Rose to my editor for the first time. I was so locked in to Norah. Her thoughts poured out of me and on to the page like water. As I wrote, I had this growing need to explain all the facets of mental illness as I understood them. That didn’t stop, in fact, it grew more determined, and suddenly I was using Rose to a draw a map of a mentally ill mind. Luke undoubtedly plays an important part in Norah’s life, but she needed the space of this book to show people how painful and frightening it is to have a mind like hers.

Kenny: Norah’s OCD is depicted as placing her very much inside a distinct world, which is also true of being immersed in a book. Are they related at all? 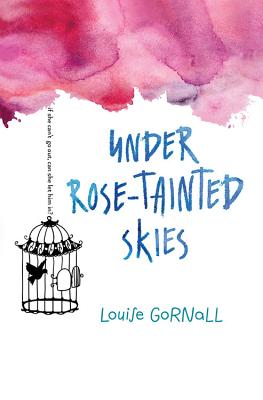 Louise: It’s entirely coincidental. I mean, I didn’t even realise there was a world to be built around Norah. Her life, my life, was so … repetitive. So dull and depressing. Nothing ever happened. There was no foundation, no big events, no people, no real conflict to inspire world building. This book shaped an understanding in me, one that had gotten lost beneath embarrassment and exhaustion. I knew OCD, agoraphobia, and a myriad of other problems had impacted me, how could I not? But it wasn’t until I started writing Rose that I really observed the magnitude and scope of the world mental illness had built around me.

Kenny: What are your favorite book worlds to spend time in?

Louise: I’m a huge fan of contemporary settings. I know that might seem a little boring, there are, after all, some fantastical worlds floating around in YA fiction, full of magic and whimsy, but as some one who lost out on a lot of their youth due to sickness, who missed things like, dances, school trips, and competitions, contemporary settings give me the chance to reinvent my teen years, vicariously, through some seriously cool characters.

Kenny: I often felt that Norah would have liked to give Plato a piece of her mind regarding his Chariot allegory, the one with Reason being the Charioteer. That allegory is bedrock in our culture. Does it put too much pressure on teenagers in general?

Louise: Yes. These days, balance is hard to find, let alone define. And reason is wide open to interpretation. Teens are pulled in so many different directions. I think Norah would argue that Plato needs at least a dozen more horses in his allegory. When I sent Rose to my editor, one of the things she kept commenting on was the beauty of Norah’s self awareness, and how, despite that, despite logic and reason pulling Norah in the right direction, she still cannot overcome the gauntlet that is morbid thinking — and to her credit, those morbid thoughts aren’t always so farfetched. To Norah, “but what if…?” isn’t just a question, it’s a way of life, and I think it’s fair to say that a lot of today’s teens are in the exact same position.

Kenny: Thanks so much Louise!

Louise: It’s been a pleasure. Thank you so much.