If you were to stop by the Maine State Museum and climb a flight of stairs you would encounter a truly amazing exhibit called Maine Voices from the Civil War. Don’t miss it! The architect of the exhibit and the museum’s chief curator of History and Decorative Arts is none other than Laurie LaBar, an old friend of the bookstore. Laurie wrote a companion book to the museum exhibit which I thought was so exceptional that I made arrangements to be the only bookstore outside of the museum shop to carry it. To find out more about both the book and the exhibit I tracked down Laurie.

Kenny: Maine Voices embodies the principle that a museum exhibit is held together by a narrative much as any other form of storytelling. Can you tell us a bit about the exhibit’s narrative?

Laurie: My goal was to show people how Mainers experienced the war, as reflected in the objects they carried, used, or made, and in the letters and diaries they wrote. The Maine Voices of the title are heard via the written word, but also implied through the objects of material culture in the exhibit: the artifacts. The exhibit begins much like a book does, by setting the stage and introducing the protagonists. I then traced the path a soldier might take, first to camp and battle. If he was lucky, the soldier would return to camp after battle. If not, he might go to hospital, to prison, or be buried. Eventually, if he was lucky, he returned home. As one goes through the exhibit, one passes from one focus to the next, seeing objects and images of Maine soldiers and reading what they had to say about their experiences. There are three other sections to the exhibit. One is about everyday life in Maine during the war. Another discusses two war-related incidents in Maine territory: the explosion of the Caleb Cushing by Confederate privateers and a Confederate raid on Calais. The third talks about the end of the war: the emotional whiplash of joy, relief, and grief of April, 1865, and the sense of celebration as Maine soldiers returned home.

Kenny: The book covers many things not in the exhibit, such as the large section on Maine’s Civil War Battle Flags. How did the exhibit’s narrative translate over to your book?

Laurie: We only borrowed one object for the exhibit, but many of the images came from elsewhere. I wanted the book to include just objects in the collections of the Maine State Museum. And artifacts carry narrative weight that might not translate in photographs of them, so I had to expand upon some discussions and minimize others. Nearly all of the narrative threads made the jump from exhibit to book. The exception is the Confederate raid on Calais, as the museum holds no relevant papers or artifacts. Folks at the National Archives were wonderfully helpful, and we are posting transcriptions of the Calais raid documents on our web page, along with the full text of every letter quoted in the exhibit, and several diary excerpts. Those went off to the web folks last week, all 162 pages of them. I had some great volunteers who transcribed the letters and researched every soldier. We have over 130 brief biographies for the web. I expect it will all be live by mid-October. 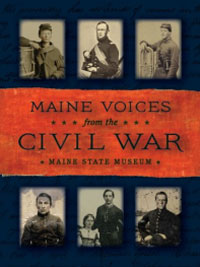 Kenny: One of the most striking elements of the exhibit is the mural drawn by John O’Dea an Andersonville prisoner, from memory. Did he have a career in art after the war or was this a singular masterpiece?

Laurie: We weren’t able to find out much about O’Dea. He moved west shortly after the war. As a new immigrant from Ireland, he had little to hold him in Maine. Like many, many 19th century people, he drops out of the record.

Kenny: We know from science fiction, fantasy and romance novels that going back in time to historical hotspots, is not only possible but probable. Modern travelers stranded on the 16th century Scottish highlands have their own hostel, for example. Have you thought about what you would have done during the war?

Laurie: I would like to think that I would have been another Sarah Sampson. Her husband was the first colonel of the 3rd Maine, and Sarah accompanied him to war, working in the hospitals, helping the wounded. When her husband became ill and had to resign his commission she saw him safely home and then returned to the front. All of her belongings were lost in the Battle of Savage Station. She escaped on a steamer, which came under fire on the retreat! But chances are, if I had been a woman in Maine at the time, I would have had children and have been left to keep the family fed and the farm or business running in my husband’s absence. Less glamorous and dangerous, but no less difficult a task.

Kenny: One certainly does come away with an appreciation that Maine’s engagement in the Civil War extends far beyond Little Round Top. Was that part of the purpose of the exhibit? 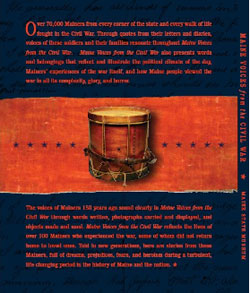 Laurie: In a way. Like most exhibits, Maine Voices was driven by the artifacts we have, and it was my job to coax a story out of them. We have some incredible objects. The things that moved me most were the stories of everyday heroism. William Livermore of Milo—who was at Little Round Top—wrote a heartbreaking letter home to his brother, three days after the Battle of Gettysburg. William Merchant of New Gloucester was wounded and taken prisoner at Savage Station. He was released after a month, but died two weeks later. And the museum has five fragments of the flag torn up by the 16th Maine on the first day of Gettysburg before they were overrun by Confederate forces. Most of those who survived were taken prisoner. Only 40 escaped. Daniel Webster Marston of Strong was a 13-year-old drummer boy in the 9th Maine who was left alone after his father was promoted to the 16th Maine. It took his father a year get him transferred to the 16th, and he got permission just three weeks before Gettysburg. Little Round Top is present in the exhibit, of course. The 20th Maine’s battle flag is in pride of place. But it was one part of one battle, and there were 70,000 other soldiers who also fought for Maine in the war.

Kenny: Well congratulations! Have you decided what your next big project is?

Laurie: Catching up on paperwork? Seriously, I’m involved in a writing project which will serve as a catalog for the museum, as well as telling the history of Maine from prehistory until… well, we haven’t figured out yet quite where we’re stopping. It will be a history of Maine in 100 objects, and Tilbury House will be publishing it in 2015, I think, or the spring of 2016. And I’m continuing research on Maine’s quilts, and hope to have an exhibit and book on that subject in another four years or so.