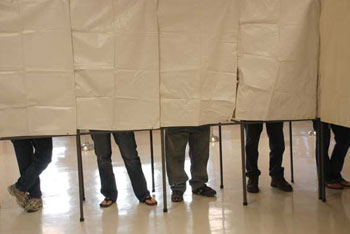 On March 3, for the first time in 20 years, Maine will have a presidential primary election. It will be only the third time in the state’s history such an event will be taking place-the others being 1996 and 2000.

The date marks, however, a somewhat more familiar though still unusual landmark in the annals of People’s Veto Referenda. For on the same day as those enrolled in the political parties will be staking out their preference for president, all voters will have a chance to weigh in on whether to reject a bill passed last year by the legislature. This was the law that was aimed at doing away with non-medical exemptions for immunizations required for entry into public schools, day care and medical facilities.

What makes the “People’s Veto” a bit more unusual than most other citizen referenda is that it seeks to arrest implementation of a law before it goes into effect. In this sense those against the law have already won some measure of victory. That’s because when they filed the necessary 63,000 signatures last summer to put the law out to a vote it stopped the law from going into effect until a public referendum could occur. Otherwise the measure would have already been on the books since mid-September.

Because the signatures to stop a law from being implemented have to be gathered in a mere 90-day window – the time between when the legislature adjourns and when most laws go into effect – the People’s Veto is one that’s not as frequently taken from the political tool box as the more typical citizen initiatives. Only 30 previous “veto” efforts have made it onto the ballot in the 111 years this option has been available in Maine. During the same time 64 initiatives – meaning petition drives aimed at introducing a new law or overruling one that’s already taken effect – have been put on the ballot.

Moreover, People’s Veto activists have been much less successful in putting their grievances before voters in the last several decades than they were when the option first became available. Nineteen were on the ballot from 1909 through 1941 while the upcoming vaccination law veto will be only the twelfth in nearly 79 years.

What then is the track record so far for the “veto” system in Maine? If recent history is any indication, voters have been fairly consistent in striking down laws served up to them on the “veto” plate. All five of those put forth in the last 11 years have been successful. They include, however, such a broad array of subjects that it’s difficult to discern a pattern that would give much guidance for predicting the upcoming vote.

The most recent laws overturned include the rejection of the so-called Beverage Tax in 2008, striking down a same sex marriage law in 2009 – a measure that three years later did win voter approval, however – turning thumbs down on a tax reform bill that would have cut income taxes but at the same time increased sales taxes in 2010, the vote to overturn a GOP law that would have banned same day voter registration in 2011 and then most recently the June 2018 successful veto of the legislature’s attempt to repeal ranked choice voting.

In keeping with this trend of “veto” measures that have such a wide span of subjects this year’s is the first in Maine on immunizations.

The most popular subject of the “vetoes” historically has been taxation measures, three of them alone from 1929 to 1941 that struck down gas tax increases. Four others threw out other new taxes.

Overall, of the 30 “veto” referenda so far since 1909, 18 have been successful and 12 have failed. However, if the seven tax vetoes are not included, the record is almost even, 11 successful and 12 unsuccessful. The unsuccessful efforts include one in 1920 to prevent women from voting in presidential elections and one five years later that attempted to forestall the implementation of standard time.

One thing all have in common is that such movements are inherently directed at repudiating the established political order. After all, there can’t be a “People’s Veto” unless the legislature and ordinarily also the governor has seen fit to get behind the law in the first place.

However, such votes, narrowly focused on a single issue, are not necessarily a measure of the personal popularity of a law’s public adherents. Take the case of the 1958 People’s Veto of a law that added a mere dollar to driver’s license fees – the first increase since 1912 – and 7 percent to truck registrations. Despite support from Governor Edmund Muskie, nearly 83 percent of those voting – 106,840 to 22,495 – overturned the law. That it was not a personal rebuke to Muskie, however, was borne out by the fact that just six months later Muskie would go on himself to win 61 percent of the vote in upsetting incumbent U.S. Senator Frederick Payne.

Similarly, Governor Angus King’s position for Gay Rights in a 1998 People’s Veto was rejected – as was his position on a Forest Practices Referendum – in the same year that voters later chose to keep him in office with a 59 percent mandate that still stands as the highest of any Blaine House aspirant of the last six decades.

Clouding the ability of pollsters to forecast the outcome of a People’s Veto is that there is usually no political party to which one can explicitly anchor the result. This year’s vote on immunization may have more partisan political overtones than others, however, in that democrats are perceived as being more likely to be against the “veto” than republicans.

Voters unaffiliated with either party, who in Maine make up the largest voting block, may hold the balance of power.

We shall soon find out.